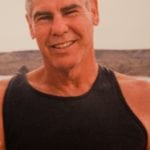 Butch died of a heart attack at his Lawrence home on Friday, December 9, 2011. He was 64 years old.
He was born January 16, 1947 at Scott Air Force Base, Illinois, the son of Charles Wood Clark and Ann Clark. He graduated from Shawnee Mission East High School, Prairie Village, Kansas, in 1965. For the last twenty years he lived in Lawrence and worked as a carpenter.
Survivors include his daughter, Sunina Upshaw; his brother Jackson Clark and wife Brigid Murphy and their daughter Aubin Murphy, all of Lawrence; his nephew Adam Clark, Hong Kong; and many loving friends.
There will be a party in Butch’s honor at 7:00 PM, Saturday, January 14, 2012, at Johnny’s Tavern, North Lawrence.