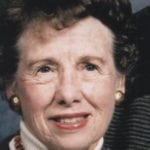 Dorothy May Pine died on August 16th in Boulder at 91 years of age. She had been struggling with the devastating effects of Alzheimer’s during the last years of her life. Dorothy was born on April 24, 1920 in Lawrence, Kansas to Ernest Handsome May and Ester Wilhemina (Abels) May. She was a graduate of the University of Kansas with a degree in nutrition. She was a member of the Kappa Phi sorority and Secretary of the Independent Student Association at KU. On July 26, 1942 Dorothy married Robert Eugene Pine in San Diego.
As the wife of a World War II naval aviator, Dorothy spent many of her early years raising a family and moving the household to various naval bases around the country. In 1963, the family permanently settled down in Boulder, CO with Robert’s retirement from the Navy. Dorothy became a real estate agent working for Walter Slack Reality and Robert went to work for the University of Colorado.
Upon their retirement they traveled extensively. Dorothy and Robert became the first couple in the world to have visited each of the world’s 192 recognized countries as well as 123 territories, island groups and special destinations as established by the Travelers Century Club. Dorothy is also recognized as the first woman to have achieved this milestone. They are considered to be the world’s most traveled couple and were duly recognized in 2006 by the Colorado State Senate and House of Representatives for this accomplishment.
A Kansas girl through and through, when asked what her favorite destination in the world was, her answer would always be Lawrence, Kansas.
Dorothy is survived by three children: Judith Young of Broomfield, Jeffrey Pine of Blackhawk and Jeremy Pine of Longmont, seven grandchildren and five great-grandchildren.
Dorothy was preceded in death by her husband, Robert, who died in 2008, two brothers, Nelson May of California and Donald May of Kansas.
There will be a memorial service held at the Sunrise Senior Living facility, 3955 28th Street, Boulder, in the Reminiscence wing on Saturday, August 27, 2011 at 11:00 a.m.
In lieu of flowers, contributions can be made to Vista Care Hospice, 4350 Wadsworth Blvd. Suite 250, Wheat Ridge, CO 80033, in memory of Dorothy Pine.