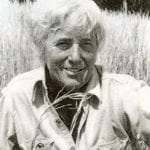 Memorial services for Robert N. Sudlow, 90, Lawrence, will be 3 p.m. Wednesday at Trinity Episcopal Church. A private family inurnment will take place before the service.
Mr. Sudlow died Thursday, March 25, 2010, at his home.
He was born Feb. 25, 1920, in Holton, the son of Fred and Adria Newton Sudlow.
Mr. Sudlow studied with artist Albert Bloch at Kansas University, receiving a bachelor’s degree in fine arts, and with painter Richard Diebenkorn at the California College of Arts & Crafts in Oakland, where he earned his master’s in fine arts. He studied at the Académie André Lhote and the Académie de la Grande Chaumière, both in Paris, and at the University of California, Berkeley. He served as a U.S. Navy rescue pilot in World War II and was awarded a Distinguished Flying Cross.
He returned to Kansas in 1945 and began teaching at KU in 1947. He was appointed professor of drawing and painting and taught for 41 years, retiring in 1987 as professor emeritus of art. He received many fellowships and awards, including the Kansas Governor’s Artist Award, 1974, and was named Kansan of the Year by Native Sons and Daughters of Kansas in 1997. His work has been featured in numerous exhibitions and is included in the collections of the St. Louis Art Museum, Cleveland Museum of Art, Joslyn Art Museum, Mulvane Art Museum, Albrecht-Kemper Museum, Brooklyn Museum, Nelson-Atkins Museum, Sheldon Memorial Art Gallery, Spencer Museum of Art, Beach Museum of Art and many more.
In 1987, “Landscapes in Kansas,” a book of Mr. Sudlow’s paintings, was published by Kansas University Press, and in 2002 the book “Spiritual Journeys: The Art of Robert Sudlow” was published. He traveled to Lawrence’s sister city, Eutin, Germany, in 2001 and displayed his paintings there as part of a cultural exchange. His art career encompassed more than 60 years and continued into retirement, as he portrayed Kansas’ landscapes through oil paintings and lithographs.
He married Lillan Gehb of Berkeley, Calif. They divorced. He married Barbara Keeler Wolf in 1985. She survives, of the home.
Other survivors include three daughters, Mitzi and Amy Sudlow, both of Lawrence, and Gretchen Sudlow, Arcata, Calif.; a son, Peter, Lawrence; three stepchildren, Felicia Owens, Reno, Nev., Mindy Small, Denver, and Grant Wolf, Houston; two grandchildren, Rachael and Quentin Sudlow; 10 stepgrandchildren; a sister, Alice Ash, Holton; and a niece and nephew.
The family will greet friends following services at the church, 1011 Vt.
The family suggests memorials to the Nature Conservancy or Kansas Land Trust, sent in care of Warren-McElwain Mortuary.
Online condolences may be sent at warrenmcelwain .com.