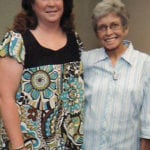 Funeral services for Judith Ann Rider, 67, Baldwin City, will be at 2 p.m. Thursday at Rumsey-Yost Funeral Home. Burial will follow at Vinland Cemetery in Vinland.
Ms. Rider died Friday, May 1, 2009, at Kansas University Hospital, Kansas City, Kan.
She was born July 25, 1941, in Stockton, the daughter of James L. and Anna Ruth Chandler Marsell. She moved to Lawrence at age 2 and graduated from Lawrence High School in 1959.
Ms. Rider worked for the agricultural extension office for several years during and after high school. She worked for a short time at Memorial Park Cemetery, and then worked for Curtis 1000 for 27 years, retiring in 1995.
She and her husband lived on a farm in rural Baldwin City for 29 years and raised quarter horses, dogs and cats. She enjoyed animals and listening to her husband play his guitar.
Her husband, Dennis Edmonds, preceded her in death.
She was also preceded in death by a brother, James Marsell Jr., and a sister, Eva “Bebe” McGill.
Survivors include two daughters, Denise Pickens and Deborah Rider, both of Lawrence; one son, Dennis Rider Jr., Gardner; four sisters, Helen Midgarden, La Vale, Md., Elaine Davison, Lawrence, Connie Miller, Winchester, Va., and Pam Saunders, Baldwin City; one brother, Charles Marsell, Mount Vernon, Ohio; and eight grandchildren, Dawn, Dustin, Darci, Deena, Jason, Levi, Joshua and Jake.
Friends may call from noon to 9 p.m. Wednesday and from 9 a.m. until service time Thursday at the funeral home, where the family will receive them from 7 p.m. to 8 p.m. Wednesday.
The family suggests memorials to the Lawrence Humane Society, sent in care of the funeral home, or the organ donation foundation of the donor’s choice.
Online condolences may be sent at rumsey-yost.com.