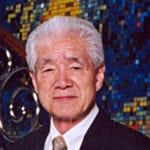 A funeral service for Andrew Takahisa Tsubaki, 78, Lawrence, will be at 1 p.m. Sunday at Warren-McElwain Mortuary. Inurnment will be in Pioneer Cemetery.
Mr. Tsubaki died Wednesday, Dec. 16, 2009, at his home.
He was born Nov. 29, 1931, in Tokyo, the son of Ken and Yasu Tsubaki.
Mr. Tsubaki received a bachelor’s degree in English from Tokyo Gakugei University in 1954, post-graduate in drama at University of Saskatchewan in 1959, a master’s degree in theater arts from Texas Christian University in 1961; and a doctorate in speech and drama from the University of Illinois in 1967.
He taught at the Bunkyo-ku 4th Junior High School in Tokyo from 1954 to 1958 and was a scene designer at Bowling Green State University from 1964 to 1968. He held appointments at Kansas University as assistant professor, associate professor and professor of theatre and film, and East Asian languages and cultures from 1968 to 2000.
Mr. Tsubaki was director of the International Theatre Studies Center from 1971 to 2000 and director of International Classical Theatre. He was chairman of the East Asian languages and cultures department at KU from 1983 to 1990. He became professor emeritus in 2000.
He directed several plays, including Kanjincho, Rashomon and King Lear between 1973 and 1995. He choreographed the plays Antigone, Hamlet and The Resistible Rise of Arturo Ui, among others, between 1987 and 1994.
Mr. Tsubaki was a visiting professor and guest lecturer at Carleton College in 1974 and again as Benedict distinguished visiting professor of Asian Studies in 1993, Tsuda University in 1975, Tel Aviv University in 1975, Missouri Repertory Theatre in 1976 and National School of Drama at New Delhi in 1983.
He was a citation recipient of the Japan Ministry of Foreign Affairs in 2003 and was named to the Order of Sacred Treasure by the Japanese government in 2006 for promoting cultural exchange and mutual understanding between the United States and Japan. He was named an honorary citizen of Katohi, Greece, for his work in establishing a semiannual KU summer study abroad program in theater.
Mr. Tsubaki held visiting scholar appointments as a World University Service Scholar at the University of Saskatchewan in 1958, a Research Fellow for The Japan Foundation in 1974 and 1990, and a Research Fulbright grantee in 1983.
Publication activities include area editor of the Asian Theatre Journal, University of Honolulu, from 1982 to 1994, member of the Editorial Board of Studies in American Drama from 1985 to 1988, contributing author to Indian Theatre: Traditions of Performance in 1990, and contributions of seven entries in Japanese traditional plays to the International Dictionary of Theatre, Volume 1 in 1992, and Volume 2 in 1994.
Academic association memberships include election in 2002 as a fellow of the College of American Theatre, member of the American Theatre Association, chairman of the Asian Theatre Program from 1976 to 1979 and the Association for Asian Studies.
Mr. Tsubaki practiced Ki Aikido martial arts from 1978 and was a fifth degree black belt and a founder of the Kansas Ki Society.
He married Lilly Yuri Takashiba on Aug. 3, 1963, in Regina, Saskatchewan, Canada. She survives, of the home.
Other survivors include two sons, Arthur Yuichi, Rockford, Ill., and Philip Takeshi, Campinas, Brazil; six grandchildren; and a brother, Yoshihiro, Yokohama, Japan.
The family will greet friends after the service.
The family suggests memorials to Kansas Ki Society, sent in care of the mortuary, 120 W. 13th St., Lawrence, KS 66044.
Online condolences may be sent at warrenmcelwain .com, subject: Tsubaki.