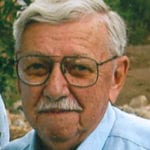 Private graveside inurnment for Donald Lee Baars, 80, Lawrence, will be in Oak Hill Cemetery at a later date. Mr. Baars died Monday, July 7, 2008, at Lawrence Memorial Hospital. He was born May 27, 1928, in Oregon City, Ore., the son of George William and Happy Lela Wallace Baars. He graduated from Oregon City High School in 1946 and attended the University of Oregon and Vanport College. He graduated from the University of Utah in 1952 with a degree in geology. He returned to graduate school and received a Ph.D. in geology from the University of Colorado in 1965. Mr. Baars served in the U.S. Army for two years in Japan, 1952 to 1954. He then worked as a geologist for Shell Oil Company and later as a research geologist for Conoco. He taught geology for three years at Washington State University and then became a professor of geology at Fort Lewis College in Durango, Colo., in 1968. He earned a commercial pilot’s license with instrument rating. He originated river field trips for geologists in the Grand Canyon in 1969 and conducted educational trips for geology students and professional geologists on the San Juan and Green Rivers while at Fort Lewis College. Mr. Baars worked as a consulting petroleum geologist from Evergreen, Colo., until the mid-1980s, when he worked as a research petroleum geologist for the Kansas Geological Survey. He retired in 1996. He was a member of the American Association of Petroleum Geologists, Society for Sedimentary Geology, a fellow of the Geological Society of American, twice president and honorary life member of the Four Corners Geological Society, Rocky Mountain Association of Geologists, New Mexico Geological Society, Grand Junction Geological Society and Kansas Geological Society. Mr. Baars received the Distinguished Public Services to Earth Sciences award from the Rocky Mountain Association of Geologists in 1991, and the Journalism Award from the American Association of Petroleum Geologists in 1997. He presented many talks to various professional societies and published more than 100 technical papers in professional journals and guidebooks. He also published numerous books on the geology of the Colorado Plateau country for non-geologists. He was an avid mountain climber and made the second ascent of St. Peter’s Dome in the Columbia River Gorge in 1947. He made the first ascent of Stein’s Pillar in central Oregon in 1950.He married Neva Jane Weaver in 1948. She died in 1995. He married Renate Hensiek on Jan. 21, 1996. She survives, of the home.Others survivors include three daughters, Karla Denise English, Willcox, Ariz., Jodi Megan Neil, Ignacio, Colo., and Cayli Dawn Utter, Grand Junction, Colo.; nine grandchildren; and three great-grandchildren. Mr. Baars was preceded in death by a brother, Arden, and two sisters, Adrien and Mavis June Cook. The family suggests memorials to the American Heart Association, sent in care of Warren-McElwain Mortuary. Online condolences may be sent at www.warrenmcelwain.com, subject: Baars.