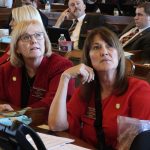 Kansas state Reps. Susan Concannon, left, R-Beloit, and Suzi Carlson, right, R-Clay Center, watch an electronic tally board as the House approves a Medicaid expansion bill, Thursday, March 21, 2019, at the Statehouse in Topeka, Kan. Both support expansion, and Concannon has been a key part of efforts to get it passed in recent years. (AP Photo/John Hanna)

TOPEKA — A modified version of Democratic Gov. Laura Kelly’s plan for expanding Medicaid in Kansas has cleared the House with bipartisan support.

The House’s 69-54 vote Thursday sends an expansion bill to the Senate. Its future there is uncertain.

Republican legislative leaders oppose Medicaid expansion. They argue that it will be expensive for the state despite the federal government’s promise to cover 90 percent of the cost of Medicaid health coverage for up to 150,000 additional Kansas residents.

But 28 of the House’s 84 Republicans broke with their leaders and joined the chamber’s 41 Democrats in voting yes.

Supporters believe the bill will help struggling families and financially strapped rural hospitals. They added a provision ending the expansion within a year if the federal government breaks its funding promise.