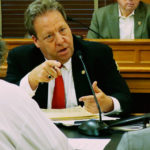 In this file photo from May 2, 2018, Kansas state Sen. Tom Holland, D-Baldwin City, is pictured during tax negotiations at the Statehouse in Topeka. (AP Photo/John Hanna)

“Clergy leadership are adults that children must be able to trust to keep them safe,” Holland said during an afternoon news conference at the Capitol in Topeka. “(The bill) mandates that they report suspected abuse or neglect to authorities. It is an extra layer of protection for all Kansas children.”

“Many other states, including Missouri, have laws in place that make clergy mandatory reporters,” he said. “It only makes sense that Kansas add it to our law.”

Holland said he expected support from his colleagues to make the bill law.

Holland introduced the bill alongside a family from Jefferson County who allege that their 10-year-old son was sexually assaulted by teenagers at a rural Lawrence church in 2017. The Journal-World has determined that the case was investigated by the Douglas County Sheriff’s Office.

“Once the Sheriff’s Office completed its investigation, the case was turned over to the Douglas County District Attorney’s Office,” Sgt. Kristen Channel, a spokeswoman for the sheriff’s office, said in an email Wednesday.

Cheryl Wright Kunard, assistant to District Attorney Charles Branson, said Wednesday that the DA’s office decided in August 2018 it would not press charges in the case because of insufficient evidence.