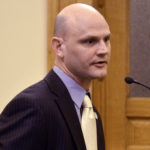 Republican state Rep. Scott Schwab has won the Kansas secretary of state’s race two years after his 10-year-old son died in an accident at a water park.

Schwab defeated Democrat Brian McClendon in Tuesday’s election. Schwab had been favored because Democrats have not elected a Kansas secretary of state in 70 years.

Schwab’s son, Caleb, died in August 2016 on a giant waterslide at the Schlitterbahn park in Kansas City, Kan.

McClendon is a former Google and Uber executive who returned to his hometown of Lawrence last year.

Kobach gave up the secretary of state’s office to run for governor.

Schmidt is a pharmacist who has served in the Senate since 2005. She is chairwoman of its Public Health and Welfare Committee and has been a key player on health legislation.

She’s also a GOP moderate who has supported expanding the state’s Medicaid health coverage for the poor and disabled following the 2010 federal Affordable Care Act.

McLaughlin is a former regional manager for a health services company and has served as president of the state NAACP chapter. He ran unsuccessfully for Congress in 2016.

The Democratic Party called on Swain to drop out of the race in June because of a poster in her law office showing the superhero Wonder Woman pulling a lasso around a police officer’s neck. Critics said the poster promoted violence against law enforcement officers.

Swain apologized but said it was meant as a metaphor for cross-examination and a zealous defense of clients. She also said she had seen injustices caused by “less-than-honest police officers.”

Schmidt is a former Kansas Senate majority leader who was first elected attorney general in 2010 and re-elected in 2014.

Republican incumbent Jake LaTurner has won a full, four-year term as Kansas state treasurer after being appointed last year to the office.

He was appointed in April 2017 by former Republican Gov. Sam Brownback to replace Republican Ron Estes, who won a special election for the Wichita-area congressional seat formerly held by U.S. Secretary of State Mike Pompeo.

LaTurner was a state senator from Pittsburg at the time. He was first elected to the Senate in 2012.

Francisco is a former Lawrence mayor who was first elected to the Senate in 2004.

The district covers the western two-thirds of Kansas and is among the safest for the GOP in the nation. Republicans have represented western Kansas in Congress for more than 60 years.

Marshall is a Great Bend physician who won the seat with establishment GOP support in 2016 by ousting tea party Rep. Tim Huelskamp in the primary.

LaPolice was making his third run for the seat. He also lost to Marshall in the 2016 general election running as an independent candidate and unsuccessfully challenged Huelskamp in the GOP primary in 2014. He is an Army veteran who farms near Clyde.

Republican Rep. Ron Estes has won a full term in Congress representing a Wichita-area district he first won in a tight special election last year for the seat formerly held by Secretary of State Mike Pompeo.

Estes defeated Democrat James Thompson in a heavily Republican 4th District that President Donald Trump won with 60 percent of the vote in 2016. Pompeo won re-election that year by 31 points. Pompeo’s resignation to join Trump’s administration led to a special election in which Estes defeated Thompson, a civil rights attorney.

The campaign was marked by personal attacks, with Estes pushing stories about Thompson’s previous brushes with the law and Thompson slamming Estes for accepting donations from political action committees.