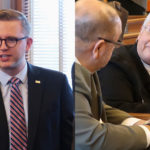 TOPEKA — Kansas will swear in its first two openly LGBT state lawmakers next month and the new Democratic governor promises to end a ban on discrimination over sexual orientation or gender identity in state hiring and employment decisions once she takes office.

Yet other goals for LGBT-rights activists, such as expanding the state’s anti-discrimination law covering landlords and private employers, might not be much closer to fruition — despite a historic national wave of victories by LGBT candidates and Gov.-elect Laura Kelly’s promise to break with Republican predecessors on policy.

The GOP still has large majorities in the Legislature, and it will be a little more conservative after this year’s elections. While Kelly’s election likely prevents new laws that LGBT-rights advocates oppose, they probably will struggle to undo policies enacted in recent years when Republicans held the governor’s office.

“It’s not the governor who decides if we get hearings or if bills come out of committee,” said Tom Witt, the executive director of Equality Kansas, the state’s most influential LGBT-rights organization. “That’s going to make it a little more challenging.”

Kelly has promised to issue an executive order — possibly on Jan. 14, her first day in office — to end anti-LGBT discrimination in state hiring and employment decisions.

“Gov.-elect Kelly wants to send a message to people across this state, and across the country, that Kansas is an open, welcoming place that does not tolerate discrimination of any kind,” spokeswoman Ashley All said.

But the partisan breakdown in the Legislature did not change, and among Republicans, conservatives gained at least half a dozen House seats at moderates’ expense and elected a new, more conservative majority leader Monday. In the Senate, a moderate senator resigned after being elected state insurance commissioner, and her replacement is all but certain to be more conservative.

“Kansas is still Kansas, and I think most Kansans understand the nature of the family,” said Chuck Weber, executive director of the Kansas Catholic Conference, a former state representative from Wichita.

Kansas voters added a ban on same-sex marriage to the state’s constitution in 2005, with 70 percent approval. It has not been enforced since the U.S. Supreme Court’s decision in 2015 legalizing gay marriage nationwide.

In 2007, then-Democratic Gov. Kathleen Sebelius, a friend and political ally of Kelly, issued an executive order banning anti-LGBT discrimination in state employment. But conservative Republican Gov. Sam Brownback rescinded it in 2015, arguing that such a policy should be set by legislators — who clearly weren’t going to do it.

Brownback resigned in January to become U.S. ambassador-at-large for international religious freedom. New GOP Gov. Jeff Colyer said his administration would not tolerate discrimination but did not reinstate the formal protections in Sebelius’ order.

Colyer signed a measure in May providing legal protections to adoption agencies that cite faith-based reasons for refusing to place children in homes that violate their religious beliefs. The legislative debate centered on agencies that won’t place children in LGBT homes. Supporters saw it as religious liberties measure, but Kelly has called it an “adoption discrimination law.”

Reflecting social conservatives’ influence, the Kansas Republican Party’s election platform, adopted in May, called for an amendment to the U.S constitution barring same-sex marriage, drafted so “judges and legislatures cannot make other arrangements equivalent to it.”

“The benefits and privileges of marriage exist only between one man and one woman,” the platform said.

Kansas has been a reliably red state in presidential elections for the past 50 years and until Kelly’s and David’s victories this year, the GOP had won every statewide and congressional race starting in 2010.

Yet GOP conservatives and moderates have feuded enough over the decades to give Democrats opportunities, and Kelly’s victory continued a half-century tradition of alternating control of the governor’s office. Groups such as the Family Policy Alliance of Kansas are preparing for political battles over what they view as attempts to limit religious liberties of social conservatives.

“This idea that American society or Kansas is just this awfully bigoted, anti-gay culture is belied by what we see around us,” he said. “You can be elected to public office in Kansas as a member of the LGBT community and no one bats an eye at it.”

Ruiz and Woodard ran on platforms that included support for LGBT rights but emphasized issues such as voting rights, education funding, expanding the state’s Medicaid health coverage to more families and lowering the state’s sales tax on groceries.

Ruiz said when she campaigned door-to-door, her sexual orientation “never came up” and voters did not appear to care. She said she doubts that attitude would have been as widespread a decade ago.

Woodard won in a district that had been held by conservative Republicans who’d backed religious objections measures, like the adoption law, and Equality Kansas described his GOP predecessors as strongly anti-LGBT.

But with the state as a whole, he said, “We don’t know how much it has shifted.”

Ruiz and Woodard also expect that it will be harder for colleagues to pass anti-LGBT measures.

“They will see our faces,” Ruiz said. “They will hear us speak.”