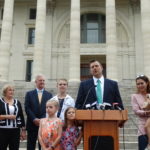 TOPEKA – Republican Secretary of State Kris Kobach kicked off his general election campaign for governor on Wednesday in a race that some political experts are now describing as a toss-up.

“The general election begins today. The race is on,” Kobach said during a news conference outside the Kansas Statehouse.

It was Kobach’s first public appearance since incumbent Gov. Jeff Colyer conceded the primary race Tuesday night, a week after polls closed in the Aug. 7 primary. As of Tuesday, Kobach held a 345-vote lead over Colyer, out of more than 316,000 ballots counted up to that point. But the remaining counties that have yet to canvass their votes likely do not have enough provisional ballots for Colyer to close that gap.

Kobach’s victory in the primary, combined with state Sen. Laura Kelly’s win in the Democratic primary and the likely entry of independent candidate Greg Orman, sets up a three-way race for the governor’s office.

That prompted the nonpartisan Cook’s Political Report on Wednesday to move the race from the “likely Republican” column to a toss-up.

“But, Kobach’s victory isn’t necessarily good news as most GOP strategists consider him to be a flawed nominee. As a result, the race moves to the Toss Up,” the political handicapping website reported Wednesday.

The website Real Clear Politics also rates the race as a toss-up while Sabato’s Crystal Ball, operated from the University of Virginia, rates it as “leans Republican.”

During his news conference, Kobach outlined a staunchly conservative agenda that focuses on cutting taxes, cracking down on illegal immigration and “shaking up the establishment,” three things he said he has in common with President Donald Trump, who endorsed Kobach in the primary and who reiterated that endorsement Wednesday on Twitter.

“My friend and very early supporter Kris Kobach won the Republican Nomination for Governor of Kansas last night in a tough race against a very fine opponent,” the president tweeted. “Kris will win in November and be a great Governor. He has my complete and total Endorsement!”

Kobach said he expects Trump to visit Kansas and campaign personally on his behalf at some point before the Nov. 6 election.

Speaking on illegal immigration, which he has crusaded against for years, Kobach cited a highly disputed study by the Federation for American Immigration Reform, or FAIR, claiming that the state of Kansas spends $377 million a year in state and federal funds providing benefits to illegal immigrants.

The study itself actually claims the total is $503 million a year, but the study has been roundly refuted by other organizations, including the libertarian Cato Institute, which called the study “fatally flawed” because it over-estimated the number of undocumented immigrants in the country and included the cost of benefits consumed by U.S. born children of undocumented immigrants.

The FAIR study also cites the cost of educating children of undocumented immigrants as the single largest category of costs. But officials at the Kansas State Department of Education said Wednesday that such figures are impossible to verify because Kansas schools do not collect data on students’ citizenship status.

But Kobach has cited such statistics in campaigns before, and it appears to resonate with his supporters, as evidenced by his two election wins to the office of secretary of state in 2010 and 2014, and his primary election win this week for governor.

Both Kelly and the Orman campaign indicated they intend to paint Kobach as a repeat of former Gov. Sam Brownback, who resigned in January to take a job in the Trump administration, leaving office with one of the lowest approval ratings of any governor in the country, according to polling by the political website Morning Consult.

“With Kris Kobach as governor, Kansans get all of the failed policies of Sam Brownback plus Kobach’s unique brand of hyper-partisanship and self-promotion,” Kelly said in a statement Tuesday night, following Colyer’s concession speech. “Quite simply, Kris Kobach is Sam Brownback on steroids, and that’s the last thing that Kansans need right now.”

“There’s absolutely no education in the second kick of a mule,” Edelen said in the statement. “Mr. Kobach’s full embrace of the failed Brownback tax experiment and his party’s Washington agenda would starve this state’s fragile recovery and run Kansas back into the ditch.” 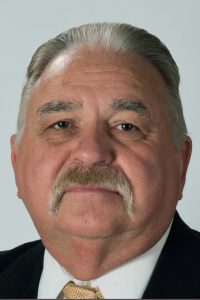