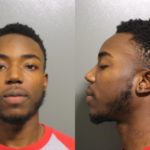 A Lawrence man has been ordered to serve 17 months in prison after being convicted in a shooting that injured a 17-year-old girl.

Rashan Gill, 21, was sentenced Tuesday in Douglas County District Court for the incident that took place in the early morning hours of July 5, 2018. On that night, the girl was in a car with friends who had been aiming Roman candles at the apartment building where Gill, then 20, lived. Gill came outside and fired a handgun at their car, and a bullet hit the girl in the back seat.

On Tuesday, Gill told Judge James McCabria that he had not addressed the court previously, but he wanted to speak. He said he didn’t know why he’d grabbed his gun in the first place, and he didn’t intend to hurt anyone. He described the chaos of the night, losing composure when he got to the shooting.

“I want to say sorry to her,” Gill said of the victim. He said he wanted to apologize to her family, as well, and to ask her if she was OK.

“I will never forget what I did,” Gill said, through tears. “… After I go to prison, this is not just going to go away. … I have to live knowing I could’ve killed that girl.”

After his arrest in September 2018, Gill was charged with criminal discharge of a firearm, a felony. However, in January, he instead pleaded no contest and was convicted of attempted aggravated battery, a felony, the Journal-World previously reported.

The Roman candle war created “utter chaos” for 10 or 15 minutes outside Gill’s apartment, at the Reserve on West 31st in the 2500 block of West 31st Street, his appointed attorney Branden Smith wrote in earlier court documents arguing that his client fired in defense of himself and his home.

Three times Gill went outside to tell the people to leave, taking his gun the second and third times, Smith wrote. Someone from the car shot Gill in the chest with a Roman candle, and he fired back in self-defense, unfortunately hitting the uninvolved girl in the back seat, Smith wrote.

The girl’s injuries were serious but not life-threatening. Prosecutor Alice Walker told McCabria on Tuesday that the girl recently had surgery to have the bullet removed and she will not suffer any permanent injuries other than scars.

At Tuesday’s hearing, Gill told McCabria that he has a child on the way. He said he hasn’t been able to talk to his girlfriend because she was a witness in the case, but he hopes he gets the opportunity to be in the child’s life once he’s out of prison.

Walker said the state was seeking the standard sentence of 18 months, and she noted it was fortunate for both Gill and the victim that there will be no long-lasting effects for the girl.

McCabria said in sentencing Gill that if he actually is the person he was presenting himself to be in court Tuesday, he made a mistake, “but you’re going to recover from this.”

With the sentence of 17 months, Gill is eligible for a 15 percent good time credit. He will also have a 160-day credit from time he’s already served, and after he is released, he’s subject to 24 months of post-release supervision.

The judge said he believed it was appropriate to waive court costs and fees.

“Get out of (the Kansas Department of Corrections) and start putting yourself and your finances together,” McCabria told Gill. He said he believed what Gill had told him, and he hoped his life would go forward in a positive fashion.