KU study: Sports organizations waste work time during NCAA tournament too, but it has benefits 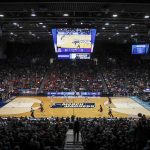 Spectators watch from the stands during the first half of a First Four game of the NCAA college basketball tournament between Temple and Belmont, Tuesday, March 19, 2019, in Dayton, Ohio. (AP Photo/John Minchillo)

When it comes to March Madness, employees of university athletic departments are just like the rest of us — they’re keeping up with the games at work, too.

But in some cases, this lack of productivity is actually encouraged and produces its own set of benefits for workplaces, said Jordan Bass, a KU assistant professor and author of a study investigating workplace culture as it relates to the NCAA’s national men’s basketball tournament.

According to several previous studies, about $134 million in wages and about $1.9 billion in productivity for businesses is lost each year when the NCAA Tournament returns to television, computer and phone screens across the country, Bass said. The first two days of the tournament feature many games that tip off during the workday.

But Bass and his fellow researchers — Zachary Wilkerson, a student researcher at KU, and University of Northern Colorado scholars Brent Oja and Rammi Hazzaa — found that focusing on lost productivity ignores a key benefit from the tournament: improvements in morale.

Bass said the study, which was published in the Journal of Intercollegiate Sport, concludes that workplaces can improve employee happiness by participating in tournament activities, such as bracket pools. This type of benefit is important in the current workplace landscape, Bass said, because supervisors are more worried about employee retention and happiness than in the past.

“Employees really enjoyed it and supervisors largely found it to be beneficial from a cultural perspective,” he said. “At least in the sports setting, it seemed to be worth it for them to have something for employee morale that they could work around even if it did cause them to work a little less.”

While it may seem obvious that some athletic departments would be interested in the tournament, Bass said the researchers only spoke with employees and supervisors from sports organizations that are not participating in the tournament.

“It would be a whole different deal if their team was actually playing,” he said. “We just want to replicate as much as we could with the normal workplace, but in an athletic setting.”

Of the employees working in sports organizations, those who focus on sales and fundraising had a unique relationship with the tournament, Bass said. They were encouraged to pay attention to the tournament as part of their jobs because they would then have another topic they could use to connect with customers and donors.

“That’s knowledge they probably need to have,” Bass said. “It makes a lot of sense, but we didn’t even think about it.”

Bass said he knows the tournament is a cultural phenomenon when it comes to loss of productivity. He said he remembers growing up in Nebraska as a big KU basketball fan and having his family members call him out of school to watch the tournament.

But after years in academia, he now supports both KU and Florida State, where he received his doctorate. He also likes to focus more on the spectacle of the tournament rather than the game results, he said.

“It’s really fun to see different schools play throughout the day,” he said. “I enjoy the social aspect of it, where you have your group of friends and watch these games together of schools you’ve never thought about. It’s a fun way to socially connect with people.”

Graduate, international students at KU upset after being notified of 27.5% increase to health care premiums