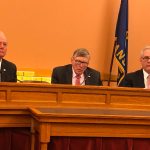 TOPEKA — A Kansas Senate subcommittee later this week will consider recommending an $18 million higher education funding plan with the chance for it to jump up to $51 million.

He also suggested a $33 million increase to be considered as an omnibus bill, which is subject to how much revenue the state receives this spring.

It is unclear how much the University of Kansas would receive from the increases. Shirley Morrow, a legislative researcher, previously said the additional funding would need to be allocated through the Kansas Board of Regents funding formula, which will not be processed until a state funding bill is passed into law.

In February, the House’s higher education budget committee recommended a plan that would add an additional $10 million to Kelly’s proposal for a total of $23 million.

Kelly’s proposal, which includes about $9 million of general higher education funding and a $4 million grant for K-State’s global food systems program, was intended to move the higher education funding level back to what it was in 2016, prior to a $30.7 million cut that then-Gov. Sam Brownback made to help offset the state’s budget crisis. Lawmakers restored $6 million of that amount in 2017 and another $15 million in 2018.

But the Kansas Board of Regents — which governs KU, K-State and other state universities — asked lawmakers to increase higher education funding by $50 million for this legislative session and another $35 million next session.

Blake Flanders, president of the Regents, said during the subcommittee’s hearing that the board’s $50 million requested increase would help the state universities keep tuition flat.

Tuition at state universities has steadily increased in recent years to cover cuts of funding from the state and inflation. Since fiscal year 2009, Kansas’ state universities have seen about a $69 million drop in state funding, according to the Kansas Board of Regents. Additionally, KU is currently facing a $20 million budget cut.