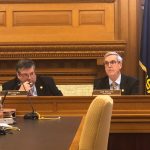 The Kansas House of Representatives higher education budget committee on Tuesday finalized its recommendation of $23 million of funding for the state institutions. It will now be forwarded to the House Appropriations Committee, which will consider whether it should be added to a statewide funding bill.

Republican state Rep. Tom Phillips said the additional $10 million of funding is provided in an omnibus bill, which is subject to how much revenue the state receives this spring. If the state does not receive enough revenue by April, the additional funding would be cut from the statewide budget, he said.

Kelly’s original higher education budget proposal included a $9 million increase to the state’s general fund to be divided among higher education institutions and an additional $4 million of funding to restore a grant for Kansas State University’s Global Food Systems program.

Under Kelly’s proposal, about $2.8 million would be allocated to the University of Kansas system. How much funding the university would receive of the additional $10 million is not clear. Shirley Morrow, a legislative research assistant, said the additional funding would need to be allocated through the Kansas Board of Regents funding formula, which will not be processed until a state funding bill is passed into law.

KU spokesman Joe Monaco said in an email to the Journal-World that while the university is pleased with the funding recommendation, a lot of work still needs to be done before the recommendation becomes final.

“We deeply appreciate the committee’s recommendation for additional higher education funding,” Monaco said. “We recognize, however, that many steps remain in the budget process, and we look forward to continuing our discussions with lawmakers about how a properly funded higher education system can drive economic growth and improve the quality of life for Kansans.”

Kelly’s proposal was intended to move the higher education funding level back to what it was in 2016, prior to a $30.7 million cut that then-Gov. Sam Brownback made to help offset the state’s budget crisis. Lawmakers restored $6 million of that amount in 2017 and another $15 million in 2018.

But the Kansas Board of Regents — which governs KU, K-State and other state universities — asked lawmakers to increase higher education funding by $50 million for this legislative session and another $35 million next session.

Girod told the Journal-World that if the Regents’ request were granted, $28 million of that two-year, $85 million increase would be allocated to the KU system, which includes the medical center in Kansas City, Kan.

“If you restore (funding) back to 2008 levels in the next couple of years, we should be able to toe the line on tuition, absolutely,” Girod said. “But without the additional dollars this year, that’s going to be tough.”

Since fiscal year 2009, Kansas’ state universities have seen about a $69 million drop in state funding, according to the Kansas Board of Regents. Additionally, KU is currently facing a $20 million budget cut, which Girod said would require the university to eliminate about 60 faculty positions and 100 staff positions over the next few years.