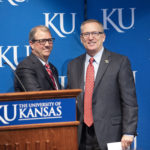 The University of Kansas is continuing to evaluate whether it wants to be in partnership with Adidas after two of the company’s former employees were convicted Wednesday on fraud charges related to a pay-for-play college basketball recruiting scheme.

In a statement from Chancellor Douglas Girod and Athletic Director Jeff Long, KU said it did not have a timeline for making a decision on whether to sign a multiyear, multimillion-dollar contract extension with Adidas. KU and Adidas announced the pending extension days before allegations of the recruiting scheme were made public in September 2017.

“Finally, while we have made no decision regarding a long-term contract extension with our apparel partner, Adidas, we continue to evaluate our options,” the two said in the statement. “There is no timetable for a decision. A strong apparel partnership is important and beneficial to all our student-athletes and our institution, and we will take great care in making the right decision for KU.”

The university’s statement did not directly address previous questions of whether KU would hire an independent investigator to review the recruiting practices of the basketball program, which was the subject of multiple allegations during the corruption trial that concluded Wednesday in New York.

“The new information needs to be evaluated and understood,” the two said via a joint statement. “We have already been in contact with the NCAA regarding trial developments and will continue to work with NCAA staff moving forward.”

KU also hired a third party to conduct a review in 2010 of a ticket scandal that led to a finding that more than $1 million of athletic department tickets had been improperly used or sold for personal gain.

In the corruption trial that concluded Wednesday, several allegations were made that left questions about recruiting methods at KU. Among them was a recorded phone conversation that included KU assistant basketball coach Kurtis Townsend seemingly being open to the idea of paying recruit Zion Williamson to attend KU, which would be a clear violation of NCAA rules. What Townsend meant by his comments, and other details surrounding the recorded conversation, did not become a focal point of the trial, as the judge ultimately didn’t allow the recording to be used by the defense team.

Girod and Long did not address Townsend’s comments in the joint statement. They did say that two more federal trials involving college basketball recruiting matters are scheduled for February and April of 2019.

“Thus, we remain unable to fully comment on the issues before us,” they said. “By limiting our comments, we are able to protect the integrity of the federal matters and the work of the NCAA.

In April, shortly after an indictment alleged family members of two KU basketball players were part of the pay-for-play scheme, Girod issued a statement saying he had “complete confidence that our staff understand and follow the rules.” The Journal-World earlier this month asked Girod whether he still stands by that previous statement, but he declined to comment, citing the ongoing legal proceedings. In his statement on Wednesday, Girod did not directly address the issue of complete confidence on adherence to all recruiting rules.

• Oct. 12 — As allegations mount, KU mum about Adidas ties and extra $1.5M it has received from the company