$352 for a textbook? Rising costs leave some students bookless; KU student leader wants to change that 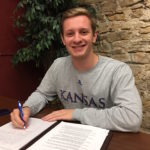 Noah Ries, KU student body president, says many students do without textbooks because they cannot afford them.

When Noah Ries was running for the University of Kansas student body president last spring, he promised that, if elected, he would work to make textbooks more affordable.

Once in office, Ries discovered two resources: Open Educational Resources through KU libraries, a service that includes a curated list of more than 500 cheap or free textbooks through the Open Textbook Library; and Openstax, a nonprofit grant-funded initiative that re-creates textbooks for high-enrollment classes. And he found like-minded people on campus — librarians, faculty and representatives from KU Bookstore — who were all working toward the same goal of reducing textbook costs.

“The cost of textbooks has risen 812 percent between 1983 and 2013 in the U.S.,” Ries said. “Biology, chemistry, physics, especially with online components, are in the $500 range, and then you have labs and four other classes that might have labs and that’s over three grand you are pushing for textbooks.”

Often student financial aid or student loans won’t cover the cost of books. Even parents who are paying for their child’s tuition don’t want to pay the high prices of textbooks, Ries said.

“Then you are talking out of pocket, and at that point there are so many students who can’t afford it and forgo getting the textbook,” Ries said. “When you are talking about equity in higher education, the best opportunity to succeed goes to those with the financial capital. It becomes a diversity and equity issue as well.”

Ries said he personally struggled with textbook affordability. As an economics major, he has done a cost analysis, asking himself if he could still get an “A” without purchasing the book required for a class. In one instance, instead of buying the $250 textbook, he joined a group that split the cost six ways.

Sometimes he wouldn’t break down and get a book until the night before the test.

The best way that students can work toward affordable textbooks, Ries said, is through helping to build awareness with the faculty and KU community and letting them know this is an issue.

Ries went before the Kansas Board of Regents during its December meeting to bring attention to the issue. He’s hoping the Regents will make textbook affordability and the expansion of Open Educational Resources a priority in the board’s 2020 strategic plan.

“If they are willing to say it’s a priority, then that holds them accountable, and we see from the Regents level progress being made,” Ries said.

He won’t stop there. In January, he plans to follow up by meeting with Blake Flanders, president and CEO of the Kansas Board of Regents.

“Food insecurity has become a huge issue on the KU campus. If students can’t afford to purchase a meal, how are they going to purchase a $500 textbook, which they didn’t budget for?” Ries said.

Part of the reason textbooks are so expensive is because there are only five major textbook companies in the industry, said Josh Bolick, scholarly communications librarian at KU and a presenter for the Open Textbook Network.

“They dominate the market and can charge higher prices,” Bolick said.

Another problem is that an instructor assigns the book without knowing the cost, and students are stuck paying for it.

“About one-third of the professors don’t know what the materials cost,” Bolick said. “And publishers aren’t great at communicating what the retail cost of their material is. Publishers do a lot to make it easy to adopt expensive books for instructors with test banks, homework questions and quizzes. So it’s easy when a rep is knocking on the door, putting it in your hand for free.”

Meanwhile, every semester, when Ries has to go to the bookstore, he realizes “just how messed up things have gotten” with the rising cost of textbooks. 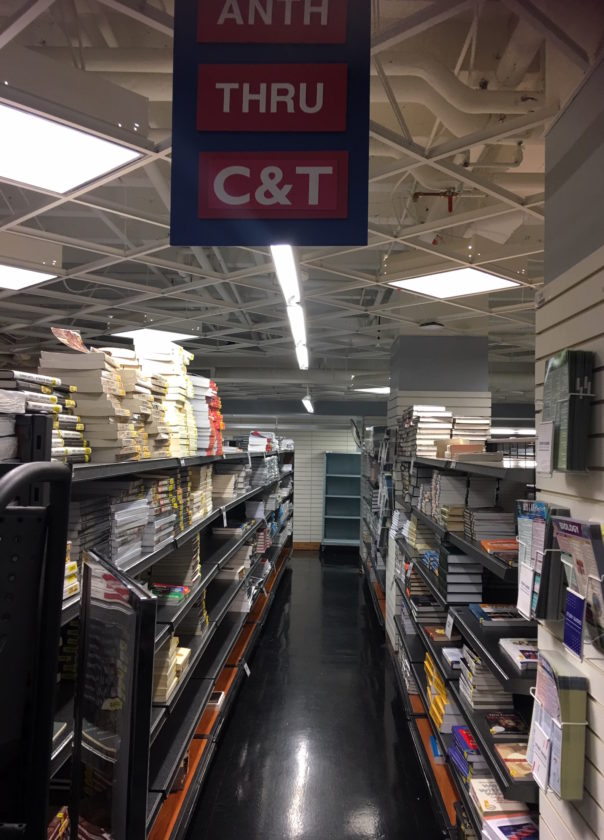 Kyle Whitley, book division manager at KU Bookstore, agrees with Ries. The cost has especially soared in law, business and engineering classes. On a recent afternoon, as he unpacked books for the spring semester, he held up a new book for a business class with a price tag of $352 new and $159 used. 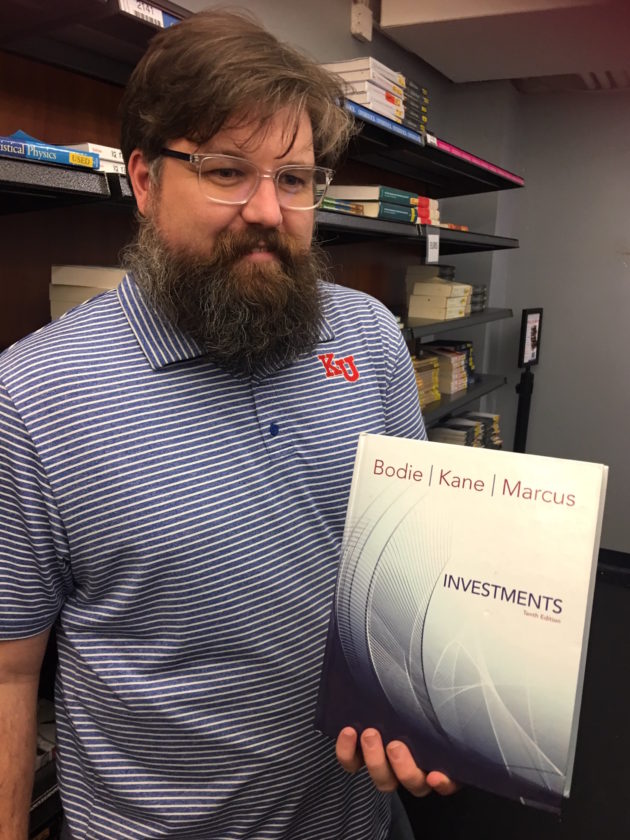 Kyle Whitley, book division manager at KU Bookstore, said the cost of textbooks has especially soared in law, business and engineering classes. On Wednesday, Dec. 19, 2018, he unpacked books for the spring semester and held up a new book for a business class with a price tag of $352.

But there is a little good news, Bolick said, because KU participates in Openstax based at Rice University in Houston. The nonprofit, grant-funded initiative replicates a commercial product to create textbooks for high-enrollment courses. 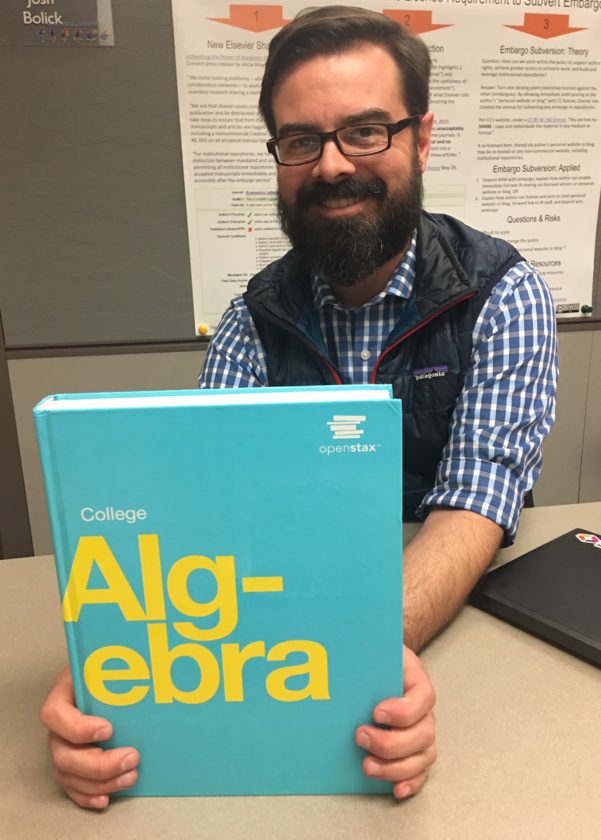 Josh Bolick, scholarly communications librarian at KU, displays a new hardbound textbook available through Openstax. The book costs $52 but is available for free online. Currently, Openstax has about 30 titles, having targeted the highest-enrollment classes in the country.

Through Openstax, a hardbound new book is $52, which is much cheaper than the commercial product, but it is also available for free online, Bolick said. Currently, Openstax has about 30 titles, having targeted the highest enrollment classes in the country.

Although Bolick is adamant that no instructor should ever be forced to use Open Educational Resources, he says his goal is to raise awareness of the issues and opportunities across the campus.

“There are other resources that solve the problem of expensive books students aren’t buying. They have strategies for handling the textbook cost, and I am diligently working on supporting the broadening of this,” Bolick said. At KU, this involves students, faculty and other instructors, KU Libraries, KU Bookstores, IT, administration and other support units like the Center for Online and Distance Learning and the Center for Teaching Excellence.

Meanwhile, Ries said the Student Senate in January will push to make sure the KU community knows textbooks are too expensive and that, as a result, students often are not buying them.

Ries knows his current efforts might not be fully realized for 20 years. But at least then, he said, students might just have better access to affordable textbooks.