Longtime Lawrence couple to lead United Way campaign to raise $1.5M; local poverty said to be on the rise 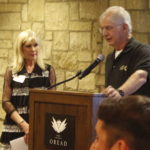 Linda and Scott Robinson speak at a kickoff event for the Douglas County United Way annual fundraiser at The Oread hotel on Wednesday, Sept. 12, 2018. The Robinsons are serving as the co-chairs for the 2018-19 campaign.

The United Way of Douglas County will again aim to raise $1.5 million in its annual campaign.

Linda and Scott Robinson, both longtime Lawrence residents and University of Kansas graduates, will serve as the co-chairs to lead the fundraising efforts for the 2018-19 campaign.

Each year, the United Way of Douglas County conducts a campaign to raise funds to improve education, financial stability and health in the community.

The Robinsons spoke briefly during the fundraiser kickoff at The Oread hotel on Wednesday. Both said they were excited to help raise money for an organization to which they have long donated.

Linda has worked for several years advocating for health and education. She founded the Lawrence Education Achievement Partners and served on the Lawrence school board for eight years. She currently serves on the endowment board for Bert Nash Community Mental Health Center.

Scott, who is a doctor, has also spent several years advocating for mental and physical health in Douglas County. He established Lawrence Emergency Medicine Associates in 1994. He also practices at the Lawrence hospital’s Wound Healing Center.

“Since then, the citizens of Douglas County have been united in the common good to help those who are the most vulnerable citizens in our community,” she said.

“It is our honor and our privilege to help reach our goal,” she added. “Let’s meet the challenge and show the world what Douglas County is really made of.” 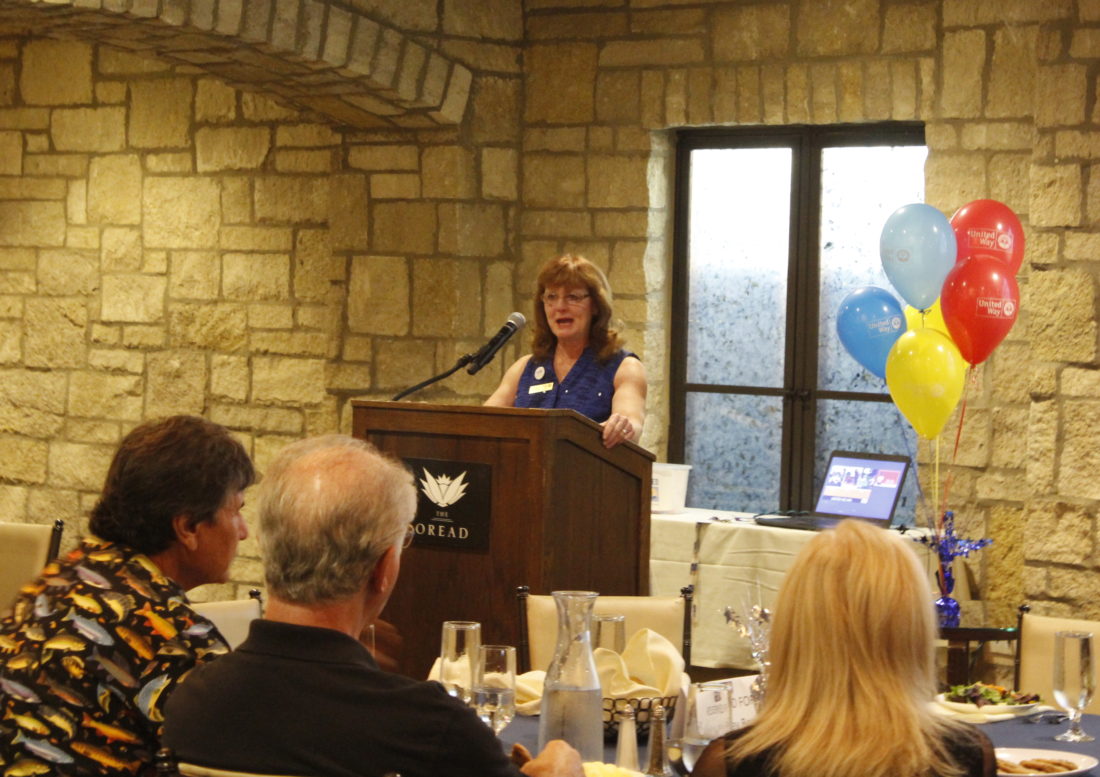 Peggy Johnson, chair of Douglas County United Way, announces the $1.5 million goal for the organization’s annual fundraiser during a kickoff event at The Oread hotel on Wednesday, Sept. 12, 2018.

Peggy Johnson, chair of the organization’s board of directors, announced the $1.5 million goal.

“I believe we can make that happen and then some,” she said.

Johnson said the campaign was especially necessary because poverty is rising. She said 12 percent of Douglas County residents live in poverty, compared with 9 percent in 2000.

“I believe the citizens see that and they want to support it,” she said. “We are just getting better and helping people understand the need.”

Jannette Taylor, who just finished her first year as CEO and president of Douglas County United Way, said the organization is better prepared this year to reach its goal. She said part of the reason the fundraising came up short last year was because she joined the organization just two days before the fundraiser began.

“Last year, everything was behind,” she said. “This year, we have more advance notice and have reached out to more donors … We feel like it will be closer to the goal.”