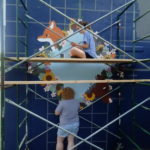 When Baldwin City Chamber of Commerce director Jeannette Blackmar walks down the community’s downtown streets, she sees blank canvas all around her.

“There’s a lot of wonderful walls that lend themselves to murals,” she said. “There’s no shortage of canvas downtown.”

There’s also no shortage of local artists with the talent to design murals, or of local stories for the works to tell residents and visitors to the southern Douglas County community, Blackmar said. That reservoir of talent and stories led to the creation of the Baldwin City Community Mural Project Committee, two completed murals and a third one in the works. At the core of the committee is a community partnership of the city, chamber, Baldwin City Tourism Bureau, Lumberyard Arts Center and Baldwin City school district, she said.

The goal of the committee is grander than covering walls with pretty and engaging paintings, Blackmar said. The committee aims to attract tourists, provide an outlet for local artists, train young talent and produce works that depict Baldwin City’s heritage, Blackmar said.

“The goal of the committee is to have five or six murals in Baldwin City,” she said. “Murals are not limited to downtown, but that is our focus.”

The first of the murals was painted in May 2017 on a downtown wall at 608 High St., Blackmar said. Lawrence artist and muralist Dave Loewenstein provided the design after seven meetings where residents were invited to share ideas, she said.

Led by Loewenstein, volunteers from the community pitched in to prepare the wall and paint the mural, which gives a thematic nod to the maple trees that line downtown streets and provide the name of the Maple Leaf Festival, the city’s popular fall festival. Large images of maple tree seed pods dominate the mural. Within the seeds are scenes from the community’s heritage, including Signal Oak Hill — where lamps were hung at night during the state’s territorial days and the Civil War to inform fugitive slaves it was safe to travel — Baker University’s oldest buildings, and Maple Leaf Festival crowds. 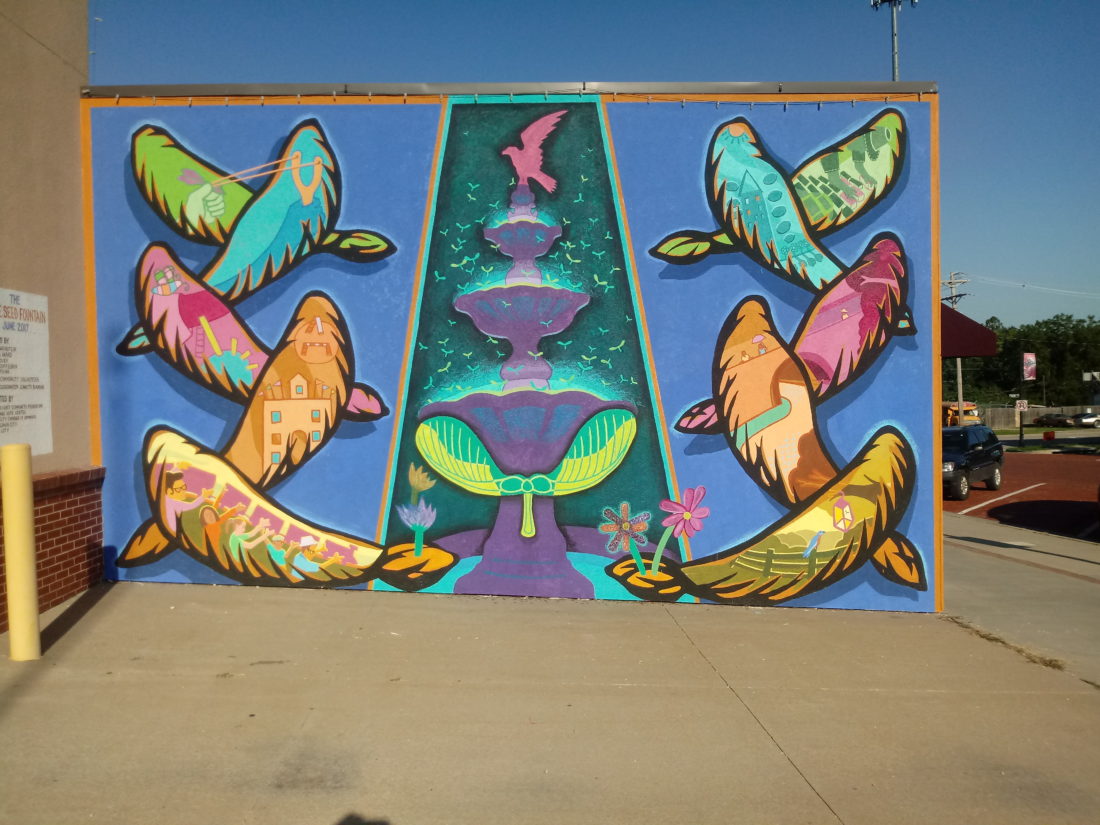 This mural, designed by Lawrence artist David Loewenstein, was the first of three to be painted in downtown Baldwin City.

The city, chamber, arts center and tourist bureau cost all contributed to the cost of $7,460 mural, Blackmar said. The effort also benefited from a $3,000 grant from the Douglas County Community Foundation and private donations, she said.

Work on the third mural is now underway at 705 Eighth St. Baldwin City artist Maggie Swanson said her design was selected in a competitive process that drew two other local artists.

“I had never done anything like this before except on a much smaller scale on bedroom walls,” she said. “I saw something online about a competition for a new mural design. I provided a design, gave a presentation to the committee and my design was selected.”

A street map of Baldwin City serves as the mural’s background, Swanson said. The foreground depicts plants and flowers common to the community and a fox and ox.

“The fox and ox also represent the character of the people of Baldwin City,” she said. “They are smart and driven like a fox, and hardworking and team-oriented like an ox.”

As with the first two works, a Baldwin High School student will serve as an apprentice on the project, Blackmar said. That gives the mural program an artist-in-training element, she said.

The new mural will cost about $5,000, Blackmar said. Like the other two works, it was kept to a smaller scale and price range as the committee builds toward larger projects, she said.

“We wanted to above all demonstrate quality to property owners,” she said. “We also wanted to demonstrate we had a vision of how to share the cultural history of Baldwin City.”

Blackmar said she and the committee have their eyes on larger downtown wall spaces and have started discussions with property owners. There’s a mutual interest, she said, but it will take time to get agreements in place, find a design the property owners are comfortable with and secure funding.

“Those larger projects would cost at least $20,000,” she said. “There is a Kansas Department of Commerce grant that could help with the cost.”