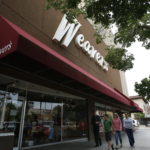 Weaver's department store, 901 Massachusetts St., is pictured in this file photo from May 2013.

Nationwide holiday spending saw its largest bump in six years in 2018, according to a report from financial services company Mastercard, and local businesses say they’re also feeling that trend.

Specifically, the Mastercard report said that in November and December of this year, U.S. consumers spent a total of $850 billion — an increase of 5.1 percent from the same period last year.

“It just felt like it was a positive mood among consumers this Christmas season,” Flannery said.

Many smaller businesses in Lawrence were also happy with the 2018 holiday season.

Cynthia Trask, owner of antique store Blackbird Trading Post, said business was so good that all of her bills for the month are already paid off.

“We made all of that (for the bills) and then some, so we’re happy,” she said with a laugh. “I’m always so scared because if you don’t make it at Christmas, you don’t make it. We live off of that for quite awhile.”

And at Waxman Candles, 609 Massachusetts St., some new items were drawing customers’ attention, said Ryder Werts, a candlemaker and sales associate for his family’s business. He said Waxman added a line of ceramic products and began selling wine glasses, which sold out.

“Last year, it was super cold and every weekend seemed miserable,” Werts said. “This year, it really worked out for us, so we’re all in really good spirits.”

Additionally, Flannery said he noticed that a significant amount of shoppers were going out of their way to support local businesses.

“We had many comments from people saying they intensely shopped in Lawrence to support Lawrence businesses,” he said. “Maybe that was a factor, too.”