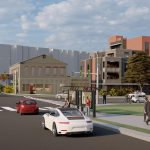 City leaders have given a key approval to an apartment, retail and hotel project that would transform a portion of the riverfront near downtown Lawrence.

As part of its meeting Tuesday, the Lawrence City Commission voted 4-1, with Commissioner Leslie Soden opposing, to approve the preliminary development plan for the 16-acre North Lawrence Riverfront Development. The multiphase project will ultimately add several multistory buildings, an underground parking garage and a public boardwalk along the Kansas River in North Lawrence.

Mayor Lisa Larsen said she thinks the project is in line with the commission’s efforts to encourage denser development within the city’s borders to increase efficiency.

“I do think it goes hand in hand with what we’ve been talking about on this commission, and that is sustainability,” Larsen said. “We’re doing infill development, we’re getting some height up there.”

The Riverfront project is proposed for a 16-acre site along North Second Street that surrounds the Johnny’s Tavern building and is across the street from the historic Union Pacific Depot. The first phase of the project calls for an addition onto Johnny’s, an addition to the top of the stone retail building next to the Gaslight Gardens pub south of Johnny’s and a multistory building directly north of Johnny’s along North Second Street. The buildings will include multiple uses, including office, commercial, hotel and residential uses, according to a city staff memo to the commission. 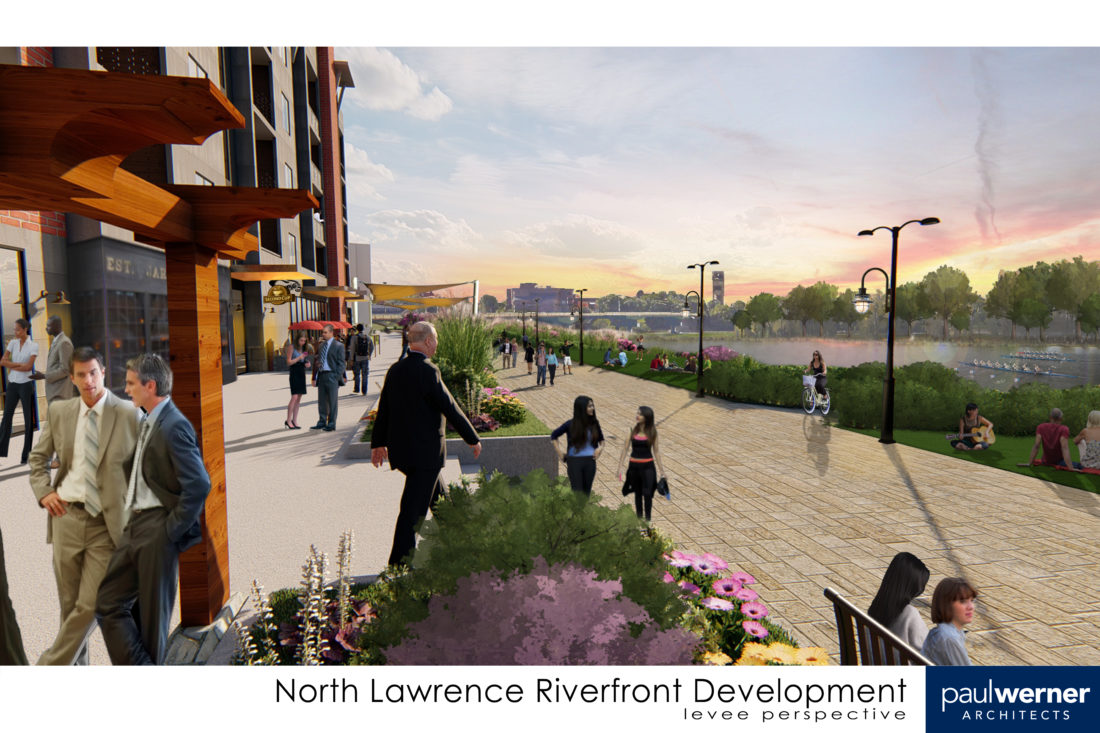 This rendering shows how the area near the Kansas River levee could look if future phases of a major development near Johnny’s Tavern are approved.

Commissioner Matthew Herbert, who said he spent a large part of his life living in North Lawrence, said he would have loved for such a project to exist when he lived there.

“This development plan ultimately does something that I think people who have lived in Lawrence for a long time have been wanting for a very long time,” Herbert said. “And that is reconnecting our population with the river. We have the luxury of having a river run through our community, and yet we have very little access to it in reality.”

As part of its meeting Tuesday, the commission also voted 4-1, Soden opposing, to rezone the 16-acre property to the Downtown Commercial zoning district. The rezoning is the first to expand the downtown district north of the Kansas River. 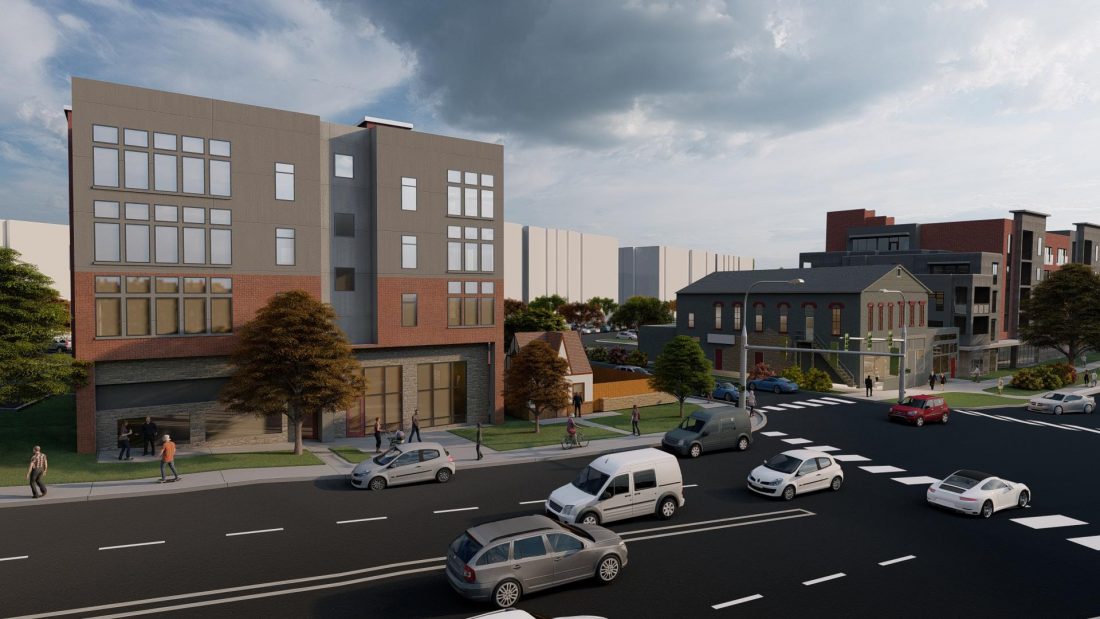 Three stories of proposed apartments atop an existing one-story limestone building at 311 N. 2nd St. are pictured at left in this architectural rendering of the North Lawrence Riverfront Development. The Gaslight Gardens pub is pictured next door, to the right, along with Johnny’s Tavern across the intersection at far right. An additional proposed five-story mixed-use apartment building is shown at far right, with several proposed multistory mixed-use apartment buildings visible at back, along the Kansas River.

Responding to a question from Soden about why mixed-use zoning wasn’t being proposed instead, Planning Manager Scott McCullough said the downtown zoning allowed for unfettered density while mixed-use zoning had density caps.

Soden said that downtown commercial zoning currently only exists downtown, and she was concerned about taking the unusual step of expanding the downtown district, especially because the city recently started developing a downtown master plan that could potentially change land use downtown.

“What concerns me is with our Downtown Master Planning process, we are actually finally looking at major issues and concerns that (commercial downtown) zoning is creating for development downtown,” Soden said. “That’s why I’m curious why we would expand CD zoning when we’re actually looking to perhaps change CD zoning.”

North Lawrence Improvement Association President Ted Boyle said that he thinks the site works for such a large project because it does not border a residential area. Boyle said he saw the development as a plus for North Lawrence. He said he thinks that the taller buildings should only be built along the levee and that the building along North Second Street should only be four stories tall. He also took issue with the appearance of the building, and he said the façade of the building should resemble the architecture of the historic Union Pacific Depot across the street. 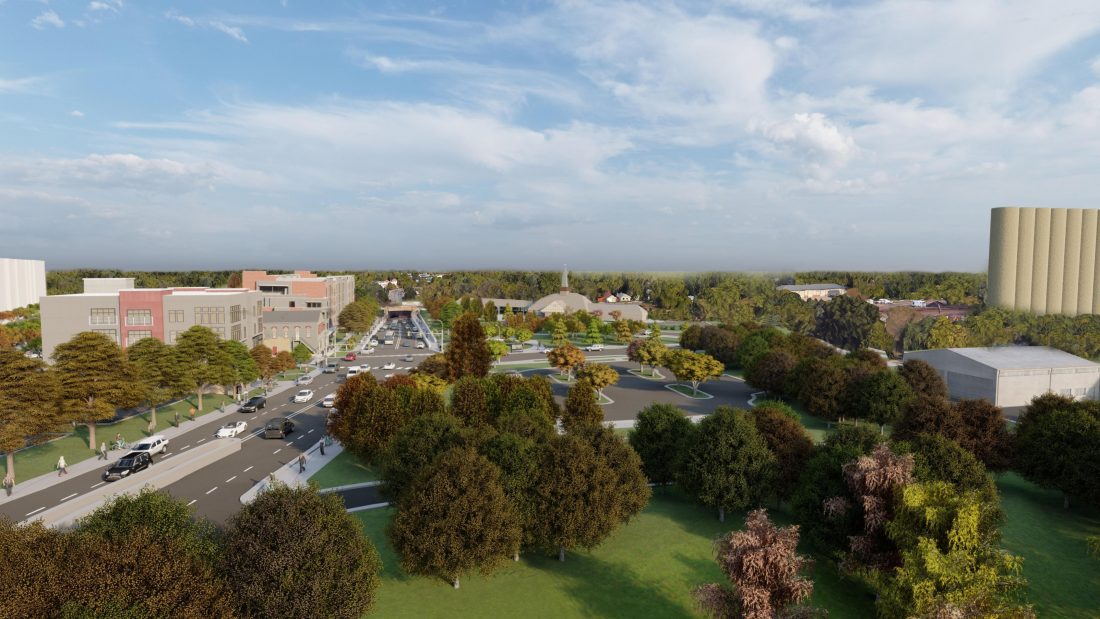 Several proposed multistory mixed-use apartment buildings are shown, at left, near the intersection North Second and Locust streets in this architectural rendering of the North Lawrence Riverfront Development. The proposed project site is near the Union Pacific Depot, 402 N. Second St., center, and the grain elevator along Locust Street, at far right.

Because the project is in the environs of the historic depot, the city’s Historic Resources Commission must also approve the design, aesthetic elements and height of the buildings. That review is ongoing, but architect Paul Werner told the commission that he thinks the consensus is to reduce the southern building next to Gaslight to three stories and partially reduce the northern building next to Johnny’s Tavern. That building would be three stories next to Johnny’s, then step up to five stories.

Modifications to building height or design must be approved by the HRC and will be incorporated into the preliminary development plan, according to the memo.

• Dec. 20, 2018 — As boardwalk project along the Kaw seeks approval, familiar question arises: How tall should the buildings be?

• Nov. 14, 2018 — Dreams of a Lawrence boardwalk on the Kansas River re-emerge in new development plans