As boardwalk project along the Kaw seeks approval, familiar question arises: How tall should the buildings be? 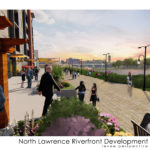 This rendering shows how the area near the Kansas River levee could look if future phases of a major development near Johnny's Tavern are approved.

Downtown Lawrence doesn’t get to have all the fun when it comes to arguing over how tall buildings ought to be. It looks like North Lawrence will get in on the action too.

If you remember, we reported last month about a proposed major development in North Lawrence along the Kansas River on property surrounding the iconic Johnny’s Tavern building. The development definitely would bring the idea of taller, downtown-style buildings to North Lawrence.

Thus far, we haven’t heard much from the North Lawrence neighborhood about the plan. But that is beginning to change. Ted Boyle, the longtime president of the North Lawrence Improvement Association, recently reached out to me to share some thoughts. Most were positive about the proposed development.

“It would be good for Lawrence, but really good for North Lawrence,” Boyle said.

But, there is a caveat. North Lawrence wants to see one of the buildings shrink by a story. Phase 1 of the development calls for a five-story mixed-used building that would be constructed along North Second Street, just north of Johnny’s Tavern. It would be a big building that would stretch all the way to the railroad overpass. It would house about 90 apartments with a total of 200 bedrooms on its upper floors. The ground floor would have a mix of retail and office space.

Boyle said he and members of his association want to see the building be no taller than four stories. He said the size of the building needs to be contained so it doesn’t overwhelm the historic North Lawrence Depot, which is across the street from the proposed building site.

The idea of lopping off a story of a proposed building has become a popular one in Lawrence. Well, popular unless you are the developer of the proposed building. There was considerable debate about how tall the Marriott hotel building should be at Ninth and New Hampshire in downtown, and some debate about the apartment/retail building across the street from it. More recently, a proposed six-story building at 11th and Massachusetts — on the old Allen Press property — got a rough reception at the Historic Resources Commission last month. Commissioners thought the apartment/retail/office building was too big and would overwhelm several historically important buildings in downtown.

Members of that development group, Core Spaces out of Chicago, said a reduction would jeopardize the financial feasibility of the project. That is a common response.

Paul Werner, the Lawrence-based architect for the North Lawrence project, told me his group of developers — which includes Johnny’s owner Rick Renfro, Lawrence businessman Jon Davis and others — is committed to working with the North Lawrence neighborhood. But Werner said removing a story from the building would hurt the feasibility of the project. He thinks the orientation of the building and other design factors can allow a five-story building to fit in fine with the historic depot across the street.

It is an interesting debate. You have developers who frequently point out that city leaders talk about wanting to have denser population to combat urban sprawl. Those developers say tall buildings are a prime way to get that density. However, there usually are concerns from planners, preservationists and others that taller buildings will change the historic character of a downtown.

Plus, I think there is also a belief by some that developers go in asking for more than they need, and reducing the size of a building isn’t as big of a deal as they make it sound. Developers, of course, dispute that.

As the city contemplates adopting a comprehensive plan that would make it more difficult to annex new lands into the city, the issue of what Lawrence will allow when it comes to building height probably will be more important than ever.

Boyle said North Lawrence residents also have two other issues they want to see resolved before the project wins approval. One, they want the aesthetic design of the proposed five-story building along North Second Street to fit in well with the historic look of the North Lawrence Depot. I don’t yet have a rendering for the building, but will pass it along. (I just recently got the rendering that is published above that shows a glimpse of what the development could look like as future phases are built along the Kansas River levee.)

Secondly, the neighborhood wants to ensure the development properly handles stormwater flow. Specifically, Boyle is pushing for a large stormwater pump to be installed as part of the development. He said developers, at least for the first phase of the project, want to use a piping system that relies on gravity to usher stormwater out of the development, through the Kansas River levee and into the Kaw.

Boyle, though, objects to that idea because he said the gravity-fed piping system only works as long as the river level remains below the level of the pipes coming out of the levee. If the water rose above the pipe, the river would start back-flowing into North Lawrence. There are several of those pipes in the levee and, indeed, city crews go out and manually close the pipes if they think the river is about to rise.

With a pump, the pipes are under pressure and can be used even during high water levels. But Boyle estimated the pump could cost upward of a million dollars.

Werner said for the first phase of the project, the development wants to use a detention pond that would be built on a portion of the 16 acres of the site that wouldn’t be developed as part of the first phase, in addition to using the 48-inch drainage pipe that goes through the levee. Werner said the key thing is the development is committed to having a plan that doesn’t spill stormwater into the North Second Street area. A pump could be used in future phases, once the pond is no longer available.

“We are not kicking the issue down the curb,” Werner said. “We just don’t need it now.”

If you have forgotten, the project would happen in phases, and if it all gets built, it would be one of the larger commercial projects in recent years. The project would include:

• A three-story addition on top of the stone retail building just south of Johnny’s, near the Kansas River bridge. It would house 24 one-bedroom apartments, plus retail space on the ground floor.

• An addition and covered patio area onto Johnny’s Tavern to the north of the existing bar and grill.

Those are the three buildings developers plan to focus on for Phase 1 of the project. Future phases would include:

• A six-story building with bar, restaurant and apartment space near the Kansas River levee.

• Two nine-story buildings that would include bar, restaurant, apartment, office and condo space near the Kansas River levee.

• A 150-room hotel that would be built farther upstream on the Kansas River.

Many of the buildings would have covered parking garages.

Werner hopes that the first building could be under construction in the summer or fall of 2019. The project has been talked about in various iterations for about five years. But Werner said he thinks the development is closer to reality than it has ever been before.

“It has been long enough,” Werner said. “We have to make a move, and everybody is making a push on it. We are working every week, talking every week about it.

The project, though, must win several approvals before it can begin construction. It is starting to go through that process now. The project won a pair of key votes at Wednesday’s meeting of the Lawrence-Douglas County Planning Commission. Its preliminary development plan was approved and it received a positive recommendation from the commission on its rezoning. The preliminary plan for the project was deferred, while the city and the development group work on a plan that could involve using city-owned property near the entrance to the Kansas River bridges to create an additional exit onto North Second Street for the project.