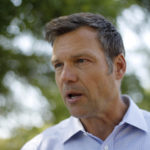 In this Aug. 3, 2018, file photo, Kansas Secretary of State Kris Kobach addresses supporters during a campaign stop in Pittsburg.

TOPEKA – An investigative journalist who is trying to obtain records from across the country of voters whose registrations have been purged from state voter rolls says he will likely sue Kansas Secretary of State Kris Kobach for denying him access to those records.

Greg Palast, an investigative journalist, author and researcher who wrote a 2016 feature story in Rolling Stone magazine about the Interstate Voter Registration Crosscheck program, which is administered by Kobach’s office, said in an interview that he is now trying to document how many voters in the United States have been wrongly purged from the voter rolls.

Kobach’s office, however, says it cannot provide that information because his office doesn’t maintain the voter registration lists. The process of cleaning up voter rolls, as required by federal law, is carried out in Kansas by each of the state’s 105 counties, and they are the ones that would have to provide that data.

But Palast indicated he’s not buying that explanation.

“I’m filing against Secretary of State Kobach because he has stonewalled our request to get information – the names and information of the persons he’s purged from the voter rolls in Kansas – and also because he’s the national head of Interstate Crosscheck, which is what I investigated for Rolling Stone,” Palast said in an interview.

The Crosscheck program began in 2005, under former Secretary of State Ron Thornburgh, and initially was a cooperative project between four states — Kansas, Missouri, Iowa and Nebraska — as a way of tracking people who move across state lines and register to vote in their new state without canceling their previous registration.

But it was greatly expanded after Kobach became secretary of state in 2011, and it has been the source of widespread criticism for producing false-positive matches of people who have similar names.

The system is already the subject of one federal lawsuit in Kansas, which the American Civil Liberties Union filed in June on behalf of Kansas voters whose sensitive personal information, including partial Social Security numbers, was released to the public after their data had been transmitted to Florida, where other parties obtained the information through a Florida open records request.

It was also the subject of two federal lawsuits in Washington, D.C., after President Donald Trump’s Advisory Commission on Election Integrity, which Kobach led as its vice chairman, sought to gather registration records from all 50 states to run through the Crosscheck system.

That commission was disbanded in January, and the lawsuits were settled when the White House confirmed in court filings last week that it had deleted all of the records it had obtained.

Palast, meanwhile, said he is trying to compile national data about voters whose registrations were wrongfully canceled because of Crosscheck.

So far, he said, some states have complied with his requests, but others have not, most notably Kansas.

“I should note that Kobach’s case is the most important in the country because he runs the Interstate Crosscheck program,” Palast said. “And he’s kind of Trump’s voter-fraud hunter.”

Kobach’s office, however, said Palast is barking up the wrong tree.

“We anticipate a baseless lawsuit from Palast,” Kobach’s spokeswoman Danedri Herbert said in an email. “He has been told repeatedly that the Kansas Secretary of State’s office does not do voter roll maintenance. The 105 counties of Kansas do.”

Attempts by the Journal-World to obtain the information in two counties revealed how difficult that can be.

Douglas County Clerk Jamie Shew said in an interview that his office hasn’t used Crosscheck for years, mainly because of the number of false positives it produces and the time it takes to verify information from the system. He also said most other elected county clerks in Kansas who administer elections also have stopped using it.

In the state’s four largest counties — Sedgwick, Johnson, Wyandotte and Shawnee — elections are managed at the local level by county election commissioners who are directly appointed by the secretary of state.

Shawnee County Election Commissioner Andrew Howell, however, said in a phone interview that he wasn’t sure whether the kind of information Palast is seeking can even be tracked.

That’s because even if Crosscheck indicates a possible dual registration, counties still have to follow federal standards in deciding whether to strike someone from the rolls. He said that includes multiple attempts to contact the voter after he or she has failed to vote in the previous two federal elections.

Palast, however, insisted that information about people who get deleted from the voting rolls is supposed to be open to the public under federal law.

Palast also denied any suggestion that his research project is an attempt to damage Kobach’s chances in the upcoming gubernatorial election, in which Kobach is the Republican nominee, because he said he has been seeking the information from Kobach’s office since 2014.

“I don’t even care who becomes governor of Kansas,” Palast said. “That ain’t my problem, that’s your problem.”