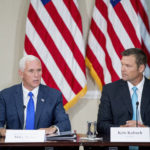 TOPEKA – A public interest watchdog group said Thursday that the Trump administration has complied with an agreement to destroy sensitive voter registration information that was collected by a now-defunct advisory commission on which Kansas Secretary of State Kris Kobach served as vice chair.

The action came in response to two lawsuits, both of which have now been dismissed, in which separate groups sought to block the Presidential Advisory Commission on Election Integrity from obtaining or keeping those records.

“President Trump’s now-disbanded voter fraud Commission was flawed from the start,” Paul Seamus Ryan, vice president for policy and litigation at the Washington-based group Common Cause, said in a statement. “Common Cause and its 1.2 million members celebrate the end of this litigation and the destruction of the commission’s illegally collected voter data.”

Common Cause was the lead plaintiff in one of the lawsuits. The other suit was led by the Electronic Privacy Information Center, or EPIC, which agreed to dismiss its suit last week.

President Donald Trump established that commission in 2017 to follow up on unsubstantiated claims he had made about widespread voter fraud in the 2016 presidential election.

“In addition to winning the Electoral College in a landslide, I won the popular vote if you deduct the millions of people who voted illegally,” Trump said in a tweet on Nov. 27, 2016, a few weeks after the election.

Official tallies showed Trump received about 3 million fewer votes in the 2016 election than Democratic candidate Hillary Clinton. But he won majorities in enough states to win the electoral vote, 306-232.

In July 2017, Kobach, who is now the Republican candidate for governor in Kansas, presided over the first meeting of the commission, which was chaired by Vice President Mike Pence. During that meeting, he touted a controversial multistate computer database system called the Interstate Voter Registration Crosscheck Program, which the Kansas secretary of state’s office manages.

That system is intended to identify voters who are registered in multiple jurisdictions. But it has been the subject of intense criticism for producing false-positive matches and for its lack of security.

In June, the American Civil Liberties Union filed a lawsuit in federal court in Kansas seeking to halt Kansas’ participation in the program until adequate security systems are put in place.

That came after the state of Florida, in response to an open records request, released personal information, including partial Social Security numbers, that it had received through Crosscheck regarding a number of Kansas voters.

At Kobach’s urging, the presidential advisory commission last year asked all 50 states to submit their entire voter registration databases to the Crosscheck system, presumably so the commission could perform a nationwide search for people registered in multiple states, and people who may have voted in more than one state.

Some states complied with the request, but others refused.

Meanwhile, Common Cause and EPIC, along with a number of individual voters, filed lawsuits arguing it was a violation of federal privacy laws for the executive branch to collect certain kinds of information about individuals.

“In the wake of the Watergate scandal and revelations that the White House had compiled information on individuals with opposing political viewpoints, Congress passed the Privacy Act to regulate the collection, maintenance, use, and dissemination of sensitive personal information by federal agencies,” attorneys for Common Cause argued in their original complaint.

Among other things, the complaint noted, the law prohibits the collection of information that describes “how any individual exercises rights guaranteed by the First Amendment.”

In January, Trump disbanded the commission, noting that several states had refused to comply with its requests for voter registration data.

On Aug. 3, Maine Secretary of State Matthew Dunlap, a Democrat who also served on the commission, said the commission had not produced any evidence of widespread voter fraud in the 2016 election.