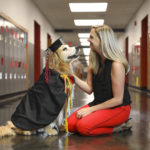 Lawrence High teacher Keri Lauxman is pictured with her therapy dog, Roxy, who is donning a cap and gown on Friday, May 18, 2018 at the school. Lawrence High junior Leo Loving made the cap and gown for the canine, who has been a regular fixture in Lauxman's classes for four years.

Roxy might just be the only Lawrence High School employee capable of napping on the job and getting away with it.

That’s because Roxy isn’t like other LHS staffers. She’s a 9-year-old Golden Retriever who provides comfort, snuggles and stress relief to students at Lawrence High as the school’s official therapy dog.

After four years at the school, she’s been with this spring’s graduating seniors every step of their high school careers. On Wednesday, during the LHS commencement ceremony, Roxy will be there, too. She’ll even wear a dog-sized cap and gown for the occasion.

“I don’t know that they’d welcome me back without her at this point,” jokes Roxy’s owner, LHS English teacher Keri Lauxman. “She’s really woven into the fabric of the school.”

Lauxman says there was some skepticism when she first approached LHS administration with the idea more than four years ago, when Roxy was in the final stages of her therapy training. The school’s former therapy dog, a yellow Labrador Retriever named Annie, retired in 2008, leaving a niche for Lauxman and her mild-mannered pup.

But Lauxman, armed with her color-coded binders full of research on the benefits of therapy dogs, wouldn’t give up. It took several months and more than a few follow-up visits to the administrative offices, but the hard work was worth it.

Lauxman’s persistence eventually paid off, and now, she says, Lawrence High just wouldn’t be the same without Roxy. She calls Roxy a “need-seeking missile” for her ability to sniff out those who might need a cuddle or a fluffy shoulder to lean on.

“She’ll kind of sidle up to a student at the beginning of class. And if it’s not a student who calls for her attention, it’s kind of an indicator for me that, ‘Maybe I need to talk to that kid today. Maybe there’s something going on that I don’t recognize,'” says Lauxman, who keeps Roxy in her classroom throughout the school day and takes her home at night. “I think she does kind of sense energy like that.”

Andi Grimes, a junior at LHS, agrees. As a student in Lauxman’s English class last year, there were times when she’d sit on the floor with Roxy or bring her out into the hallway for a quiet moment away from the activity of the classroom. For Grimes, who struggles with depression and anxiety, it’s helpful just to know someone understands.

Roxy, she says, always does.

“She’s always so happy to see you. She’s always wagging her tail. It just makes my day, because she doesn’t care if you have depression or anxiety or anything,” Grimes says. “She doesn’t judge you for your problems. She’s just there for support.”

For sophomore Elliot Bradley, having Roxy at school is, simply put, “a grounding thing.” Bradley suffers from a post-traumatic brain injury, he says, that affects the part of the brain that deals with emotion, memory and the autonomic nervous system. Next year, he’ll start bringing his own medical-alert service dog, a Great Pyrenees named Norah, to school with him full-time.

“When you have an injury like that, when you have anxiety, your hippocampus shrinks. It makes it so that you can’t distinguish between what’s real and what’s not as easily. And I feel like a lot of kids our age have that going on,” says Bradley.

“Having those little things throughout the day to bring you back to reality and ground you and help you notice your surroundings, you realize, ‘Wow, Roxy is really cute, and she’s really happy,'” he says.

She’s even cuter in her cap and gown. Leo Loving, a junior at Lawrence High, made the outfit after being approached by the school’s sewing teacher, Shannon Wilson. The cap and gown were presented to Lauxman as a surprise, she says, just in time for Wednesday’s commencement ceremony. Lauxman plans on attending with Roxy by her side — in full graduation regalia, of course.

Next year, Lauxman jokes, Roxy will be a “fifth-year senior.” Students come and go from Lauxman’s classroom, but Roxy’s ability to bond with everyone she meets remains a constant.

“Instead of just being a great dog for us to enjoy, now she gets to be amazing in the lives of other people,” Lauxman says.