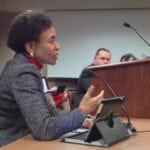 University of Kansas Chancellor Bernadette Gray-Little talks to the Kansas Board of Regents, Thursday, Dec. 18, 2014.

A Lawrence attorney says it’s likely the Kansas Board of Regents violated state open-meetings laws by employing former KU Chancellor Bernadette Gray-Little as a special adviser without taking a public vote on the matter.

Max Kautsch represents the Kansas Press Association and other media companies, including the Journal-World, on matters of free speech and open government. He alleges that the Regents violated Kansas open-meetings laws when they gathered in executive session to approve Gray-Little’s salary as special adviser, a role she is being paid $510,041 to perform. A regents spokesman recently confirmed that the board used a closed-door executive session to “direct” Regents President and CEO Blake Flanders to offer the position to Gray-Little. The spokesman also confirmed that no public vote was ever taken authorizing the expenditure of those funds.

That salary is the same payment Gray-Little received in her final year as chancellor.

“It seems pretty clear to me that it is a violation,” Kautsch told the Journal-World earlier this week.

Kautsch’s criticism stems from a September 2016 letter written by Flanders on behalf of the board. The letter, which the Journal-World obtained last week via an open-records request, expresses the Board of Regents’ appreciation and gratitude for Gray-Little’s “unfailing leadership and service” in her eight years as chancellor. In return, Flanders wrote, the board offered to pay Gray-Little’s new salary as a “consultant to the new Chancellor,” among other items.

Kautsch said the lack of a public vote was a mistake by the Regents.

“The board is allowed to recess into executive session to discuss personnel matters. It was fine to discuss whether the former chancellor would receive this money, but pursuant to Kansas Open Meetings Act, no binding action shall be taken by secret ballot,” Kautsch explained. “When decisions are made to spend a half-million dollars of taxpayer money, that smacks of a secret ballot and it is a binding action.”

Matt Keith, the Regents’ spokesman, provided only an emailed link to a 28-page FAQ document authored by the Kansas attorney general’s office, along with a brief explanation of the Regents’ position.

“As does any governmental entity subject to the Kansas Open Meetings Act, the Kansas Board of Regents has the authority to discuss personnel matters in executive session. Accordingly, the Board’s practice has generally been to conduct any discussions dealing with personnel matters in executive session,” Keith wrote in an email.

But Kautsch disagreed. The Regents’ assertion that no binding action was taken in executive session is problematic, he argued, because binding action was required as part of the promise to pay Gray-Little her $500,000-plus salary.

“This decision to authorize this payment, in my mind, is subject to attack because how is it that a half-million dollars is authorized to be paid without binding action?” Kautsch said. “How can you have it both ways? You can’t say that it is not binding action and then still write a check for it.”

The letter from 2016 outlining Gray-Little’s job responsibilities as special adviser contains language that appears to bind the Regents: “For the period of your consulting work, fiscal year 2018, you will remain on the University payroll,” Flanders wrote. The letter also promised Gray-Little she would receive the same gross salary and the same salary-associated fringe benefits she received as chancellor.

Flanders then asks Gray-Little to sign the letter if “comfortable with the mutual undertakings” outlined in it. Their two signatures are included at the bottom of the document.

To Kautsch, the letter fits the definition of “binding action,” which he argues can only be made in public session.

Gray-Little has declined to comment on her continued employment at KU, referring all questions to KU and the Board of Regents. When Gray-Little stepped down as chancellor last summer she indicated to a Journal-World reporter that she would remain a KU employee “for several months” but did not disclose that she would be on the payroll at her full salary and benefits for another year.

“I will have no role in running the university,” she said at the time.

Gray-Little also said at that time that she did not have a retirement compensation package or any contract buyout compensation coming.

Former KU Chancellor Robert Hemenway also was given a significant post-chancellor salary to remain on at KU after he announced his pending retirement in 2008. However, with cutbacks to the Regents budget, many members of the KU community said they were surprised to learn of Gray-Little’s deal when it was first reported last month.

The Journal-World has sent follow-up questions to the Board of Regents regarding the dispute around open-meetings laws. Keith, the Regents spokesman, did not immediately respond to those questions Tuesday.