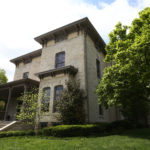 Not even two weeks after reports that three University of Kansas fraternities have been suspended since the start of the spring semester, a fourth KU fraternity is now facing a possible suspension of its own.

As of Friday morning, KU’s Alpha Nu chapter of Beta Theta Pi was listed on the national Beta directory as “subject to suspension.” The directory included no information as to why the frat might be in trouble, but noted the status change occurred Thursday, March 1.

According to the national Beta organization’s code of regulations, there are three reasons for a “subject to suspension” status: a chapter failing to meet Beta Theta Pi standards; a designation by the organization’s general secretary, board of trustees or general convention; or a determination, by these officials, that the chapter has “extremely serious deficiencies” that threaten its ability to operate as a functioning Beta chapter.

The code points out that chapters are still allowed to operate while “subject to suspension,” but the officials who made the designation may impose restrictions on the chapter.

The Journal-World reached out to representatives from Beta’s national organization, KU chapter and the university’s Interfraternity Council earlier this week regarding a rumor that the Beta Theta Pi house, 1425 Tennessee St., had received a cease and desist order from the university. Of the few that responded to the Journal-World’s inquiries, none revealed anything conclusive regarding the rumors.

The report serves as a running list of registered student organizations that have been found responsible for a violation of the KU Code of Student Rights and Responsibilities. As of Friday morning, Beta Theta Pi was not included in the report.

Barcomb-Peterson declined to comment further on the matter, citing the university’s stance of not discussing ongoing investigations.

The Journal-World also reached out to KU’s Interfraternity Council president, Marty Sedlacek, regarding the cease-and-desist rumors on Wednesday. Sedlacek, who also serves as the Beta chapter’s sergeant-at-arms, declined to comment, citing “conflict of interest.”

According to the national Beta directory, KU’s chapter has 90 members and two pledges. As of the spring 2017 semester, Beta was ranked first in academic performance among KU’s 26 fraternities, the directory noted. The Alpha Nu chapter of Beta Theta Pi has existed at KU since 1873.

Last month it was reported that Delta Upsilon, Sigma Alpha Epsilon and Sigma Phi Epsilon were not currently operating at KU as the university investigates possible violations of fraternity policies.