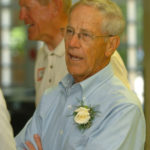 In this file photo from June 2005, former Lawrence High football and track coach Bill Freeman, front, visits with a former player during a celebration in honor of his induction into the Kansas State High School Activities Association Hall of Fame.

“Heart of a Champion: The Life and Legacy of Coach Bill Freeman” is expected to be available on Amazon.com sometime this week. The book, which costs $12, includes several stories about the former Lawrence High coach, who passed away at the age of 84 in December of 2015 after a long battle with Alzheimer’s disease.

The finished product is nearly a year in the making, though Jennifer Freeman is happy about the timing of the release.

“It’s amazing,” Jennifer Freeman said. “To know that it is going to be out near Father’s Day weekend is amazing. I think dad had a hand in that. I really do. He would be very proud. He was very humble, he probably wouldn’t want it done. But he would be honored that I did it.”

The website about her book, https://www.coachbillfreemanheartofachampion.com/, is expected to be running this week, as well.

Around this time last year, Jennifer Freeman started to toy with the idea of publishing this book. At the time, people told her that she should write it. Instead, Jennifer Freeman tasked Kansas City writer Tina Wendling with putting it in book form.

Jennifer Freeman compiled countless stories about her father from interviews with former players and coaches. She also talked to friends and gathered info from old newspaper articles, a process that took nearly eight months.

Yet, Jennifer Freeman didn’t tell her mother, Joan Freeman, about the project until a family dinner last week.

“For eight months, it had been a secret between myself and my kids,” Jennifer Freeman said. “So Tuesday night, we had taco Tuesday, which we do every week, and I told her. She cried, it was very heartwarming. She understands and she’s very happy I did it. She’s very anxious to read it.”

During the process of finding out more information for the book, Jennifer Freeman discovered a number of stories about her father that she hadn’t heard before.

Her favorite story, however, came from former National Football League quarterback Lynn Dickey, who played for Bill Freeman at Osawatomie. Dickey, who wrote the foreword for the book, told Jennifer Freeman a story about when he and her father watched a football game between the University of Kansas and Kansas State in Manhattan without purchasing a ticket.

“When they got to the stadium, Lynn said, ‘OK, I will take my ticket,” Jennifer Freeman said. “My dad said, ‘We don’t have tickets for the game.’ They climbed two fences to get into the stands and then they went up to the press box where they found seats and sat down. They both watched the game with no tickets. I had no idea.”

Bill Freeman left a lasting legacy during his illustrious coaching career. He coached at Lawrence High between 1974-90, notching five state titles in football, as well as two more in track and field.

In addition, Bill Freeman directed Osawatomie High to two state football crowns and LeRoy to one state title. He finished with a 242-81-3 record in a 36-year football coaching career, which included stops at Baxter Springs, Parker Rural and Nickerson.