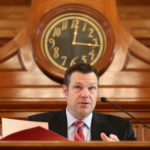 Kansas Secretary of State Kris Kobach presides over Kansas' Electoral College vote for the President of the United States in the Senate chambers of the Kansas Statehouse on Monday, Dec. 19, 2016 in Topeka, Kan.

TOPEKA — The Douglas County District Court must call a grand jury to investigate alleged misconduct in the office of Kansas Secretary of State Kris Kobach, a three-judge panel of the Kansas Court of Appeals ruled Friday.

Steven X. Davis, of Lawrence, who had run for a seat in the Kansas Legislature in 2016 and who is running in a different district this year, filed petitions in August 2017 calling for a grand jury to investigate general allegations that Kobach’s office had mismanaged the state’s voter registration system and had been “grossly neglectful with respect to their election duties.”

Kansas is one of only six states that allows citizen-initiated grand juries. 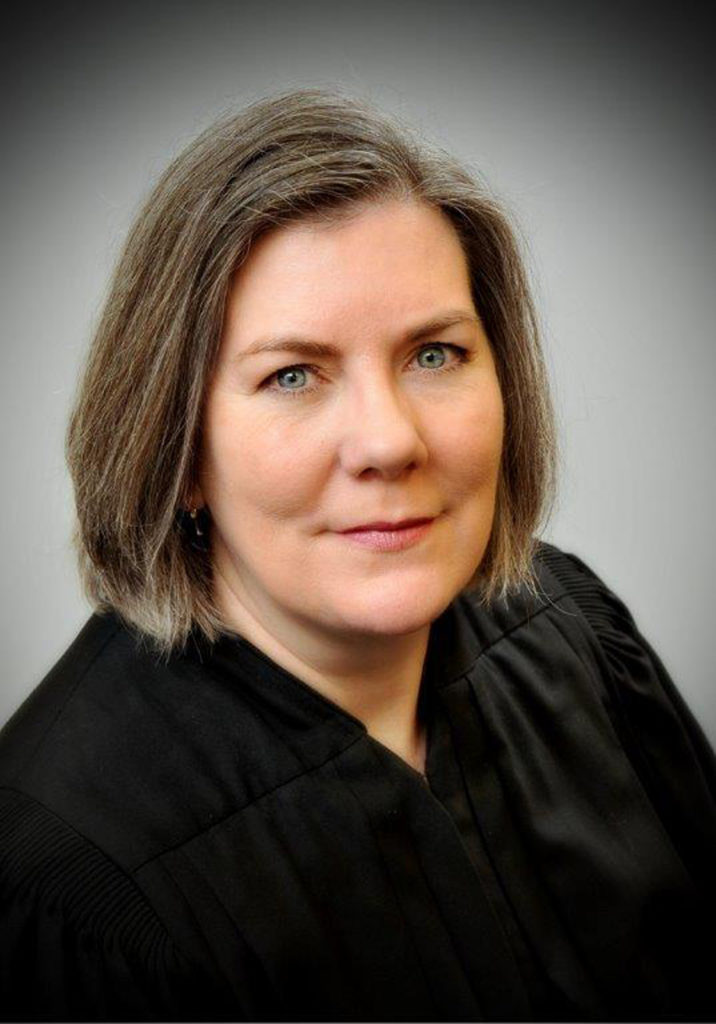 photo by: Courtesy of the Kansas Office of Judicial Administration

Douglas County District Judge Peggy Kittel dismissed the petition, saying the allegations were not specific enough. But the Court of Appeals said Friday that the Kansas statute only requires general allegations and that Davis had met the legal standard.

In his petition, Davis called for the grand jury to investigate whether Kobach or others in the office had engaged in “destroying, obstructing, or failing to deliver online voter registration,” as well as possessing falsely made or altered registration books, preventing qualified electors from voting, and “being grossly neglectful with respect to their election duties.”

In a statement, Davis applauded the ruling.

“Kansas has more stringent voter registration requirements than any other state in the nation,” he said. “These voters followed all the rules yet were still turned away at the polls in 2016. I believe Kris Kobach’s office has been aware of these problems for years and neglected to fix them. The grand jury will be able to investigate the situation and determine the facts.”

Kobach, however, said in an email statement that he was not concerned.

“Mr Davis’s petition accuses the agency of criminally handling voter registrations, yet he presented no evidence of this,” Kobach said. “His allegations are patently false. It is unfortunate that a citizen’s privilege of being able to petition for a review of government action is being used for political gain in Mr. Davis’s upcoming election at the taxpayer’s expense.”

In 2011, shortly after being sworn in as secretary of state, Kobach pushed through legislation requiring new voters in a county to show documentary proof of U.S. citizenship to register to vote and photo ID to cast a ballot at the polls.

The proof of citizenship law is currently under challenge in a federal court in Kansas where the American Civil Liberties Union has argued that it conflicts with portions of the National Voter Registration Act. A ruling in that case is expected soon.

In that same case, Kobach was held in contempt of court by U.S. District Judge Julie Robinson for violating a court order that required his office to inform certain people that they were eligible to cast a ballot.

Kansas enacted the citizen-initiated grand jury process in 1887. In its ruling, the court cited newspaper articles from that time saying the law came about during the advent of the temperance movement and was seen as a tool to force local law enforcement to shut down saloons.

The court also noted that many states have moved away from the grand jury process entirely for bringing criminal charges because, critics say, the proceedings are conducted in secret, information grand juries receive is often based on hearsay, and witnesses have no right to counsel during the proceedings.

Kansas, however, has expanded the citizen-initiated grand jury process in recent years. And ironically, the Douglas County case hinged on a change made in 2013 that Kobach himself testified in favor of during legislative committee hearings.

That change requires that a petition to summon a grand jury must contain “a reasonably specific identification of areas to be inquired into and sufficient general allegations to warrant a finding that such inquiry may lead to information which, if true, would warrant a true bill of indictment.”

The court noted that several people, including Kobach, testified in favor of the change. The proponent’s main argument was that the grand jury process had been “improperly commandeered by prosecutors,” the court said.

Only one person testified against the bill, the court noted. That was Patrick Vogelsberg, of the Kansas County and District Attorneys Association, who argued that passage of the bill would “allow special interest groups to micromanage and potentially politicize the grand jury process.”

“Accordingly, based on the plain and unambiguous language of the statute, we must remand the case for the district court to summon a grand jury,” the court concluded. “In doing so, we make no judgment regarding the validity of the claims made by Davis. Whether Davis’ allegations are meritorious is a matter for the citizen-initiated grand jury to investigate and determine.”

The opinion was signed by Court of Appeals Judges Karen Arnold-Burger, Henry W. Green Jr., and Senior Judge Daniel Hebert, of Salina, who was assigned to the case.