Have a daughter interested in computers? Lawrence now has a ‘Girls Who Code’ club 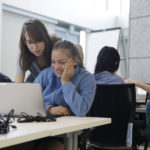 For women working in STEM, seeing really is believing.

“I’ve definitely heard of that — the idea that if girls don’t see other women in that job, it becomes the norm,” says Lauren Stephenson, an incoming junior transfer student at KU’s School of Engineering.

But Stephenson wants to change that reality for the next generation of girls. Stephenson — along with two other KU engineering students and a local database developer, all women — recently launched a Lawrence chapter of Girls Who Code. The national nonprofit aims to close the gender gap in STEM fields by providing mentors and educational opportunities to girls interested in computer coding.

According to the national Girls Who Code organization, less than a quarter of computing and technology leadership jobs are held by women. Girls Who Code works toward narrowing that gap by working with girls in grades 6 through 12.

The Lawrence club, which launched last month and meets Wednesdays at the Lawrence Public Library, is facilitated by Stephenson and three other women in computer science: KU engineering students Madi Schulte and Kalekidan Yeshiwas, and Megan Willesen, a SQR database developer with Kansas City’s Pioneer Financial.

Their program follows a curriculum outlined by the national Girls Who Code group, focusing on foundational computer science concepts like functions, conditionals, variables and looping.

Membership in the club is free, Stephenson said, and girls don’t need any prior coding experience to join. Girls Who Code even provides computers and internet access, though members are welcome to bring their own laptops or tablets from home. The club is also open to anyone who identifies as female, regardless of legal status or the gender listed on one’s birth certificate.

A key component of the lessons, which are grouped into seasonal sessions, is what Stephenson calls an “impact project.”

“They look for a problem in their community, and they think about, ‘How can I solve this with code?'” she says.

So far, Stephenson says, the response to the club has been overwhelmingly positive. As of Monday, 15 girls were enrolled in the program.

“A lot of the girls seem kind of shy, so we’re hoping we can build their confidence through the sessions,” says Stephenson, who admits to feeling unsure of herself during her first coding classes at Johnson County Community College. “But they’re definitely eager to learn.”

Girls Who Code meets Wednesdays from 6:30 to 8 p.m. at the Lawrence Public Library, 707 Vermont St. The summer session, which kicked off May 30, will end Aug. 8, though girls are encouraged to join at any time.

For more information, including how to sign up, visit hq.girlswhocode.com and enter the Lawrence club code KS3992. You can also email the club at gwclawrence@gmail.com.