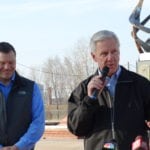 In this file photo from March 21, 2018, Willis "Wink" Hartman, right, announces he is running for lieutenant governor on a ticket with Kansas Secretary of State Kris Kobach. Hartman, a Wichita oil executive, has loaned more than $1.5 million to the campaign.

Those loans accounted for 91 percent of all the money the Kobach campaign took in during the period from Jan. 1 through July 30, those records show.

The records show Hartman made a total of 22 loans to the campaign totaling $1,544,832.88. The first, for $100,000, was made on March 4, which was 17 days before Kobach formally announced Hartman as his running mate. Before then, Hartman had been a candidate for the GOP nomination himself.

Monday was the deadline for candidates running for statewide and legislative offices to file their preprimary campaign finance reports. The primary election will be Tuesday, Aug. 7, although advance voting is already underway.

The largest loan from Hartman, for $533,438.70, was made on July 13, the same day the Kobach campaign made a large radio and TV advertising buy for the same amount.

The Hartman loans enabled Kobach, who is currently the Kansas secretary of state, to outspend all other candidates in the gubernatorial primary. Overall, Kobach has spent nearly $1.9 million leading up to next week’s Aug. 7 primary, compared with $1.2 million spent by his chief rival, incumbent Gov. Jeff Colyer.

But Colyer was more successful raising money from outside sources. His campaign took in just over $834,000 during the seven-month period, none of which came from personal loans from himself or his running mate.

“The support we have received from Kansans all over our state has been tremendous and extremely encouraging,” Colyer said in a statement Monday after publishing his campaign finance report. “I am humbled that our message of strong, optimistic, competent conservative leadership has resonated so well with Kansans. We will continue to spread that message as we approach election day on August 7th.”

Also in the GOP primary, former state Sen. Jim Barnett, a Topeka physician, raised about $38,000. But he had earlier loaned his own campaign $505,000. That, combined with money he carried over from last year enabled him to spend about $553,000 during the primary campaign.

Dark-horse candidate Patrick Kucera, who refers to himself as an “evangelical entrepreneur,” put $304,000 of his own money into his campaign, but only raised an additional $16,580 on top of that.

In the Democratic primary, state Sen. Laura Kelly, of Topeka, raised and spent the most of the three major candidates. She took in nearly $573,000 during the reporting period, all from outside sources, and spent $492,000. Kelly noted that 98 percent of her contributions came from individuals, and 80 percent were for amounts of $100 or less.

“I’m honored to have the support of such a broad and diverse group of Kansans,” Kelly said in a statement. “From Lakin to Hays to Dodge City to Pittsburg to Olathe, working men and women are ready for a change. Kansas Democrats are energized and excited to participate in the first primary we’ve had in a very long time.”

But one of her main rivals in the race, former lawmaker and former state agriculture secretary Joshua Svaty, said Kelly and her running mate, fellow Sen. Lynn Rogers, of Wichita, have the advantage of being incumbent lawmakers.

“They are both sitting state Senators in the middle of their term and regardless of the outcome of the race for Governor, they will both be sitting in the Capitol come January,” Svaty said in a statement. “Special interests and outstate money will always make the safe bet and cover themselves for the next Legislative session when there are politicians sitting in safe seats in the Senate.”

The Svaty campaign took in a little over $213,000 since January and heads into the final week of the primary campaign with about $35,000 in the bank.

Meanwhile, independent candidate and businessman Greg Orman, who has not yet officially filed to run, reported raising nearly $879,000 for his campaign, including $650,000 in loans from himself. He has until Monday, Aug. 6, to submit petitions to get on the November general election ballot.

With so much money flowing into gubernatorial and congressional campaigns this year, candidates for offices further down the ballot have found it harder to raise money.

In the five-way GOP primary for secretary of state, Rep. Scott Schwab, of Olathe, the current House speaker pro tem, raised the most money, taking in $65,655 since January, including $25,000 from himself, for a net of $40,655 from outside sources.

Longtime Republican activist Dennis Taylor, of Topeka, brought in $73,335, of which $65,250 came in the form of loans from himself.

Craig McCullah, of Topeka, the former head of administration in the secretary of state’s office, invested $135,500 of his own money and raised another $13,640 on top of that.

Rep. Keith Esau, of Olathe, who currently chairs the House Elections Committee, raised $8,392, while Randy Duncan, the former Kansas Republican Party officer from Salina, raised $3,151, including a $2,531 loan from himself.

Meanwhile, Lawrence Democrat Brian McClendon, the only Democrat in the race, took in just over $509,000 for his campaign, including $150,000 of his own money. McClendon, a former tech executive for Google and Uber, also received substantial contributions from other tech industry executives in California.

In the Republican primary for insurance commissioner, state Sen. Vicki Schmidt, of Topeka, reported raising $208,896 from January through July while spending $170,657.

Her GOP rival, Deputy Insurance Commissioner Clark Shultz, of Lindsborg, started the year with $128,173 on hand and raised another $68,180 through June 30. He spent $95,024 from January through June.

Democrat Nathaniel McLaughlin, of Kansas City, Kan., a retired health care executive and NAACP activist, reported raising only $210, including $50 from himself.

In the hotly contested race for the open 45th District of western Lawrence and Douglas County, former Lawrence Mayor Mike Amyx led the Democratic field in fundraising, bringing in $3,560. Lawrence resident Steven Davis raised $2,458, which included $200 of his own money. Aidan Loveland Koster, of Lecompton, brought in $2,095. Unlike Amyx and Davis, Koster started the year with approximately $3,800 in campaign cash that she raised during 2017, according to campaign finance reports.

On the Republican side of that race, Cynthia Smith, of Lawrence, raised $5,727, including $2,527 of her own money. The report of her GOP rival, Ronald Thacker, of Lawrence, was not available Tuesday morning.