Healthy Outlook: A look at the past and the future as Health Care Access and Heartland merge

With ‘no end in sight’ to insurance issues, community resources aim to address health care needs 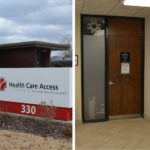 Unlike the boards of most nonprofits, the community leaders involved in the humble beginnings of Health Care Access — with $500 and one volunteer, 30 years ago — hoped the organization wouldn’t last long. Ideally, not even 15 years.

“The founders always thought that this was a temporary stopgap measure to provide a medical home for the uninsured,” said Beth Llewellyn, CEO since summer of 2015. “… The board members were always hopeful that the day would come that everyone had insurance.”

• Here’s what we know about Heartland Community Health Center and its CEO situation; leadership is mum, June 19, 2018

Clearly, that day hasn’t come, and words from the board’s 2002 annual report still ring true — it’s “with no real end in sight.”

Still, the uninsured and underinsured of Douglas County have not been without hope of getting medical care, and despite the murky, uncertain future of the Affordable Care Act and the health insurance marketplace, the community’s resources will likely remain available for a long time.

HCA announced in October that it is merging with Heartland Community Health Center. The two organizations have shared similar missions and practices through their combined 50 years in existence, but the merger will become final on Thursday.

Llewellyn, in recent weeks, has been hunting through years of HCA history.

“When you look over historically who’s been on the board of Health Care Access, it’s been a ‘Who’s Who’ of physicians and dentists and community leaders,” she said. “… We’ve been blessed to have a very strong governing board over the number of years.”

Some notable members of the board in its early years, Llewellyn mentioned, are former Lawrence mayor, state senator and longtime Kansas Insurance Commissioner Sandy Praeger as well as longtime Lawrence Democrat Paul Davis, who is currently vying for the 2nd District congressional seat in Kansas.

These early leaders, Llewellyn said, “knew the gaps in our health care system,” and knew that any one practice couldn’t have taken on all of the uninsured. That’s where safety net clinics such as HCA come in.

“You build a system where everybody can participate and you manage it in an orderly referral system so no one specialty physician in a particular specialty is doing it all,” Llewellyn said. “That would be financially not possible for that practice.”

Quite a number of partners have made that possible.

“We sent out a letter this week to 50 different practices that work with us in patient referral,” Llewellyn said — many of whom are affiliated with Lawrence Memorial Hospital.

“(LMH has) encouraged physician support,” she said. “… That has helped Health Care Access be who we are in the community.”

Additionally, the local River City Cosmopolitan Club has been instrumental in ensuring HCA patients with diabetes have access to supplies they need to manage their condition, Llewellyn said.

“That’s kind of a rich part of how Health Care Access was formed — to always look at, what are the things that get in the way of someone maintaining their health or living with a debilitating, chronic illness?” she said.

Since returning to her hometown in 2015, Llewellyn said she has realized “this strong legacy of community leadership and volunteerism,” she said.

“There is a lot of change and both closure and continuing for Health Care Access, and my motivation was making sure there’s an appreciation for the individuals to know they’ve contributed to something that has served the community as a small clinic very, very well for 30 years, and we can be excited together about the future.”

Leaders at Heartland, 346 Maine St., Suite 150, are hopeful the merger will benefit not only those who are uninsured or underinsured, but also those who have private insurance. They say it will open more doors for patients and make available care they perhaps haven’t had in the past, including integrated behavioral health, dental, psychiatric and physical therapy services.

“This merger, the way that the boards came together and made this decision, it’s because this was the right thing for Lawrence, to be able to reach more people,” said Melanie Coen, Heartland’s communications coordinator.

Jon Stewart, Heartland CEO, explained that those who have private insurance aren’t “taking a spot” from someone who doesn’t by seeking care at Heartland.

“The more people we see who have insurance, the more we can see and accommodate who don’t,” he said. “… It’s a little bit counterintuitive.”

That means Heartland can help people with insurance plans that are often described as “catastrophic coverage” — i.e., if you’re hit by a bus, you probably won’t be in debt for the rest of your life, but you still have to pay hundreds of dollars for out-of-pocket for basic primary care visits or standard blood panels.

“If you still need primary care but you can’t afford it because of your high deductible, we can still slide your patient responsibility,” Stewart said.

The low-end cost on Heartland’s scale for low-income patients will be $15 — the same as it was at HCA — and no one will be turned away on the day of service if they can’t pay. That cost also includes a bundle of labs and screenings Heartland can perform on-site.

“We don’t think that our sliding scale is going to be a structural barrier to folks getting care,” Stewart said.

Also, any previous balance a patient held with HCA will be wiped away: “There is no ledger that is going to start their relationship under our new banner with Heartland,” Llewellyn said.

Because Heartland has a full staff and paid practitioners, patients can expect more continuity of care — seeing the same faces at the front desk each visit, the same nurses, and so on.

“We are working actively to reach out into this community to bring folks into basic primary care the way they’ve never understood or thought of before and really impacting their health by having a longitudinal relationship with them,” Stewart said. “That’s a huge step for the health care system when people are actively engaged in basic primary care in an ongoing way.”