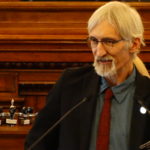 In this file photo from February 2016, Rep. Boog Highberger, D-Lawrence, speaks at the Kansas Statehouse in Topeka.

Topeka ? A bill that would make it a crime to abandon a firearm in a public place has been pre-filed for the upcoming legislative session.

Rep. Boog Highberger, D-Lawrence, pre-filed the bill Dec. 28. It comes just months after an incident on the University of Kansas campus in September when a student found a loaded handgun that had been left in a toilet stall of a men’s restroom. The gun was later found to have been stolen.

In addition, during the 2017 session, Rep. Willie Dove, R-Bonner Springs, inadvertently left a loaded handgun in a committee room.

In a phone interview, Highberger said his bill was not a response to the Statehouse incident but rather the incident on the KU campus.

“My concern really is college campuses,” he said. “My understanding is we’re the only state in the country now that allows concealed-carry on campus without training or a permit, and I think that’s got a potential to cause some real problems, as we’ve already had at least one incident.”

Highberger’s bill would make it a misdemeanor to leave a firearm in a public place where it would be accessible to someone other than the owner. The charge could be upgraded to a felony if it results in injury or death of another person.

Gun control was a major issue during the 2017 legislative session because a new law was scheduled to take effect July 1 allowing people to carry concealed handguns in virtually all government buildings, including college campus buildings.

Lawmakers eventually passed a bill allowing public hospitals and other health care facilities to ban concealed weapons, but they were unable to repeal the provision allowing concealed carry on college and university campuses. Republican Gov. Sam Brownback allowed the bill to become law without his signature.

House Majority Leader Don Hineman, R-Dighton, said Wednesday that he thinks it’s unlikely that any more gun legislation will get serious consideration in 2018.

That bill is the second gun-related bill to be pre-filed for the 2018 session. Earlier, Rep. Vic Miller, D-Topeka, introduced a bill to ban the possession of “bump stocks” or similar devices for semi-automatic weapons.

Those are devices that were used in the mass shooting Oct. 1 in Las Vegas. They make a semi-automatic work like a fully automatic weapon, which continues to fire round after round as long as the trigger is pulled.

That shooting left 58 people dead and 546 injured, making it the deadliest mass shooting by an individual in U.S. history.