Who should pay $26K for Kobach’s misconduct in court? Kobach says the state; governor says Kobach 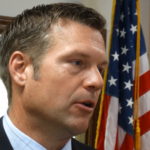 Kansas Secretary of State Kris Kobach, who is seeking the Republican nomination for governor, brushed off suggestions by incumbent Gov. Jeff Colyer that Kobach should not bill the state for the cost of a $26,000 contempt of court citation.

TOPEKA – Kansas Secretary of State Kris Kobach said Thursday that he is not personally liable for paying more than $26,000 that a federal judge ordered Wednesday as part of a contempt of court citation.

Kobach, who is seeking the Republican nomination for governor in the Aug. 7 primary, made that comment after his main rival in the race, incumbent Gov. Jeff Colyer, issued a statement saying Kobach should not put the cost of that fine on the state’s credit card, as he had done with an earlier fine.

“This is simply not a proper use of taxpayer money,” Colyer said in a statement released Thursday. “The people of Kansas send their hard-earned dollars to the state to provide essential services, not to pay fines imposed on government officials for their own misconduct.”

• Judge orders Kobach to pay more than $26,000 for ‘contemptuous behavior’

U.S. District Judge Julie Robinson issued an order Wednesday awarding lawyers for the American Civil Liberties Union $26,214.79 in attorneys’ fees to reimburse them for the cost of filing the motion for contempt.

That motion sprang from a lawsuit the ACLU filed challenging a state law, which Kobach had championed in 2011, requiring new voters to show documentary proof of U.S. citizenship to register to vote.

Robinson put that law on hold in 2016 while the case was still pending, and in June she struck down the law entirely, saying it was both unconstitutional and a violation of the federal National Voter Registration Act.

The Kansas Attorney General’s office is now appealing that decision to the 10th Circuit Court of Appeals in Denver. Separately, Kobach is appealing the contempt citation.

The lawsuit was filed against Kobach, in his official capacity as the state’s chief election officer. During the trial, Kobach, an attorney who represented himself in the case, was held in contempt of court for failing to comply with orders related to the 2016 temporary injunction.

In his statement Thursday, Colyer said Kobach ought to pay the assessment out of his own pocket. But speaking to reporters at a campaign event Thursday, Kobach fired back, saying Colyer did not understand the process.

“The governor’s comments on the subject have been relatively uninformed and ignorant,” he said. “The contempt assessment is for attorneys’ fees on the other side. The defendant in the case is not Kris Kobach personally. The defendant is the office of the secretary of state, which the Supreme Court has said, for federal court, means the state itself.”

Colyer, the former lieutenant governor, became governor in January when former Gov. Sam Brownback stepped down to accept a diplomatic post in the Trump administration. He is now seeking the GOP nomination to run for a full term of his own, but he faces six other contenders, including Kobach, former state Sen. Jim Barnett and Insurance Commissioner Ken Selzer, as well as lesser-known candidates Patrick Kucera and Tyler Ruzich.