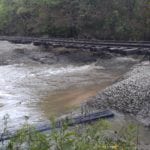 The Baldwin City Council approved Tuesday purchase of a trail easement that will provide Midland Railway with $345,000 needed to repair track damage that occurred during August flooding. The city is seeking partners to help reduce its share to the repair bill.

The Baldwin City Council on Tuesday approved a $345,000 agreement with the Midland Railway Historical Association that provides the city with a trail easement along the railroad from Baldwin City to Ottawa.

Midland offered the easement after the Baldwin City Council agreed last month to finance $345,000 in repairs needed to restore a section of Midland tracks in Franklin County that were washed out during flooding last August. Midland does not have the money to make the repairs. The track damage has limited the tourist line and the Kansas Belle Dinner Train, which has a contractual arrangement to use Midland’s tracks and locomotives, to using about half of the 11 miles of tracks to Ottawa.

In exchange for the easement, the city agrees to pay Midland $172,500 on the signing of the agreement and another $172,500 when the easements are filed with the registers of deeds in Douglas and Franklin counties.

A.J. Stevens, Midland executive director, said the agreement would be signed later this week. Stevens, who is also a Baldwin City Council member, recused himself from the vote on the easement.

Baldwin City Mayor Casey Simoneau said last month that the city would request that Douglas and Franklin counties and other partners help with the repairs at a rate that would reduce the city’s contribution to either $47,500 or $100,000. Douglas County also would be asked to contribute a minimum of $47,500 or $100,000 if Franklin County declined to participate.

Simoneau believes the Midland trail would be a significant tourist draw, especially for Ottawa with its existing link to the Prairie Spirit Trail.

Stevens said it is estimated that it would cost about $100,000 per mile to develop the trail or just more than $1 million for the entire route. The railroad has an access road along the tracks in Franklin County that would be easily converted to a trail and reduce the cost of development.

The city intends to explore federal, state and private grants to develop the trail, Rodden said. He and other city officials are scheduled to meet Thursday with representatives of Franklin County and Ottawa to discuss trail funding options. The discussions also would involve Franklin County and Ottawa contributions to the Midland repairs, Rodden said.