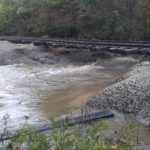 Flooding from heavy rains Aug. 22 caused extensive damage to Midland Railway tracks in northern Franklin County. Because of the damage, the excursion line can no longer make trips to Ottawa, but only to a site about 4.5 miles south of Baldwin City.

The Baldwin City Council has agreed to finance $345,000 in needed repairs to the Midland Railway tracks, with the hope that Douglas County and other partners will share in that expense.

A section of the Midland Railway tracks about 5 miles south of Baldwin City washed out during heavy flooding in August, and the nonprofit Baldwin City excursion railway said it did not have the money to make repairs. As a result, Midland and the Kansas Belle Dinner Train, which has a contractual arrangement to use Midland’s tracks and locomotives, have not been able to use about half of the 11 miles of tracks to Ottawa.

The City Council agreed to the financing at its meeting Tuesday, then authorized city staff to negotiate sharing the cost of the repairs with other entities that benefit from the railway. Both motions passed on a 2-1 vote, with Councilman Tony Brown voting no. Councilman A.J. Stevens, who is Midland Railway executive director, recused himself from the discussion and vote.

Dave Hill, chairman of the Baldwin City Economic Development Corporation, presented the council with two funding options that would split the cost of the repairs among multiple partners.

Should Franklin County not participate, the hope would be that Douglas County and Baldwin City would each contribute $100,000, private contributions would make up $50,000 and the partnering agencies would contribute $25,000 each. Hill said the BCEDC had already pledged up to $25,000 for the repairs.

“Our goal is get some kind of variation of those so we can get multiple entities participating,” he said. “The city just basically approved the funds for that financing, so that we have those funds available so that we can negotiate for the easement.”

The easement for the trail would provide an incentive for Franklin County to share in the cost of the repairs, because it would allow for a northerly extension of the Prairie Spirit Trail State Park that connects Ottawa to Iola, Simoneau said.

“The carrot for them is the trail,” he said. “People can get on their bikes, ride down to Ottawa and eat down there.”

Douglas County Commission Chair Nancy Thellman said there had been early discussions with Baldwin City officials about the county contributing to the repairs, but that no dollar figure was discussed.

The railroad’s tourism does provide a tax benefit to the county, and the county does have an economic and historical interest in the Midland Railway, Thellman said. The county provided funding to the railway through a Heritage Conservation Grant and supported state grants that made improvements at the Baldwin City Santa Fe Depot site, which is the home of Midland.

“It’s a tough one,” Thellman said. “I know they are trying to spread the pain equally. Being genuine, I would say if we don’t do something, all our investment would be lost.”

Thellman said all new funding requests the county receives are difficult to accommodate because of the state’s tax lid, which generally caps how much of an increase in property tax revenue cities and counties can levy at the rate of inflation unless they get voter approval.

Baldwin City Administrator Glenn Rodden said the city would use its cash reserves or bonding for its contribution. Those funding sources would be not be subject to tax lid consideration, he said.