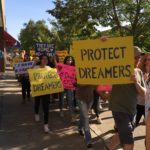 About 150 people participated Thursday, Sept. 7, 2017, in a march downtown in support of the Deferred Action for Childhood Arrivals program.

The University of Kansas School of Law is providing free legal services this month to those impacted by President Donald Trump’s recent decision to rescind DACA.

“I think there’s been a kind of anxious desire, ever since we heard the announcement, to do something to help the Dreamers,” said DeRousse, using the common nickname for DACA recipients.

The program, otherwise known as Deferred Action for Childhood Arrivals, allows young people who were brought to the country illegally as children to live, study and work in the U.S. without fear of deportation.

Initially, DeRousse said, “there was some question about what could be done” here in Lawrence. Rescinding DACA could impact as many as 800,000 “Dreamers” across the country, including the roughly 6,800 Kansas residents — according to the U.S. Department of Homeland Security — who have been approved for DACA since the program’s inception in 2012.

But at KU, where chancellor Douglas A. Girod publicly criticized the decision to end the program in a statement earlier this month, DeRousse said she and her colleagues soon realized a “huge need” to help those affected locally.

“It could make a huge difference in a lot of people’s lives with a very short amount of time to get it done,” DeRousse, also an associate clinical professor of law, said of KU’s walk-in clinic.

Originally, the walk-in clinic was intended only for Douglas County residents, but DeRousse later told the Journal-World that organizers had seen “such an outpouring of volunteer support” over the last few days that the clinic now has the ability to serve anyone, regardless of residence.

Those who have already applied for DACA status must have their renewal applications completed and mailed in time for the government to receive them by Oct. 5, DeRousse said.

The Trump administration’s plan to “phase out” the program would block first-time applicants from DACA while also ending the 30-day renewal window for those with DACA status set to expire by March 5, 2018.

The consequences for those Dreamers who fail to renew, DeRousse said, are severe.

“At that point, that person can no longer work,” DeRousse said. “They would no longer be eligible to attend school or receive financial aid; they would no longer have the ability to participate in our economy lawfully; and they are no longer protected, or deprioritized, from deportation.”

The walk-in clinic doesn’t require appointments, but those with questions (or in need of an interpreter or other accommodations) are asked to call 864-5564 in advance of their visit. Parking is available in the Allen Fieldhouse garage, and guests should bring their parking garage tickets to the clinic for validation.

KU’s legal services are free, DeRousse said, but the government’s $495 filing fee must be paid upon submission of the renewal application. Some consulates are offering financial assistance for their country’s nationals in paying that fee, however, and DeRousse said KU would help those who need assistance with researching such options.

Although the DACA Renewal Clinic is intended to serve the broader community, the university also offers separate legal assistance to KU students. Those with questions about the DACA program and its pending rescission can speak to a lawyer, confidentially and free of charge, by contacting Legal Services for Students at 864-5665.

The program’s office is located in 212 Green Hall and is open from 8 a.m. to 5 p.m. Monday through Friday.

As of December 2016, not many “Dreamers” could be found on the KU campus. A mere four students enrolled at KU that semester had received tuition adjustments under state statute 76-731a. That law allows people without lawful immigration status to pay in-state tuition and fees at state postsecondary institutions if certain criteria are met.

KU spokesman Andy Hyland said it’s difficult to know for certain just how many undocumented students are enrolled, however, because many may opt not to share their status with the university.