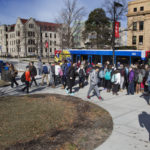 Students move along Jayhawk Boulevard on the KU campus between classes on Wednesday January 27, 2016.

University of Kansas chancellor Bernadette Gray-Little is one of more than 550 college and university presidents who signed a recently publicized letter supporting undocumented immigrant students and the federal Deferred Action for Childhood Arrivals (DACA) program. The KU Student Senate this month also passed a resolution supporting the continuation and expansion of DACA.

While many administrators and students share sentiments about the concept of welcoming undocumented immigrant students, based on numbers, some campuses are probably talking about it more than others.

KU does not have many undocumented immigrant students. However, several postsecondary schools in our state have many more.

That’s the law allowing people without lawful immigration status to pay in-state tuition and fees at state postsecondary institutions if they meet certain criteria. According to the law, to get in-state tuition students must have attended an accredited Kansas high school for at least three years; graduated from an accredited Kansas high school or earned a Kansas GED; and applied to legalize their immigration status or obtain U.S. citizenship, or plan to do so as soon as they’re eligible.

Ten state institutions have more than 10 students using 76-731a, according to a fact sheet from the Kansas Board of Regents, provided by Hyland. Those schools, based on September 2016 enrollment counts, are:

As of this week K-State President Richard Myers was the only other Kansas university CEO besides Gray-Little to sign the DACA letter, organized by Pomona College in Claremont, Calif., where close to 4 percent of students are on DACA or undocumented. Signees call DACA a “moral imperative and a national necessity”; say it should be upheld, continued and expanded; and offer to meet with U.S. leaders on the issue.

“DACA beneficiaries on our campuses have been exemplary student scholars and student leaders, working across campus and in the community,” the letter says. “With DACA, our students and alumni have been able to pursue opportunities in business, education, high tech, and the non-profit sector; they have gone to medical school, law school, and graduate schools in numerous disciplines. They are actively contributing to their local communities and economies.”

The issue has been in the media since Donald Trump’s election to the presidency. Some fear Trump will do away with the DACA program, which President Barack Obama launched in 2012 to temporarily shield from deportation young people who came to the United States illegally as children.

KU, in a recent news release, noted that while KU has no centralized resource for undocumented and DACA students, they can find referrals and other help through KU’s Office of Multicultural Affairs, the Sabatini Multicultural Resource Center, the Office of Financial Aid and Scholarships and Legal Services for Students.