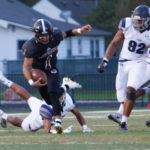 Quarterback and shortstop, that’s where most of the talented athletes start their youth sports careers.

As they grow older and cuts trim the ranks, they find themselves surrounded by nothing but quarterbacks and shortstops. The best stay put and the rest filter out to other positions.

And then there is Lawrence High senior Dante Jackson, a 5-foot-8, 155-pound sprinter who has a 43-1/2-inch vertical leap and dunks on 10-foot hoops. He spent most of his football life as a receiver and defensive back.

Jackson stood out as a sophomore cornerback for the Lions. Then, a light went off in Lions football coach Dirk Wedd’s head: Why not snap the football into the hands of the best playmaker, the son of a football coach, and watch him make plays?

That’s what Jackson has been doing for two seasons for the Lions, who squeaked into the second round of the playoffs with a 28-27 victory Friday night against Blue Valley Northwest.

“Quarterback has been really fun,” said Jackson, who also punts and plays some at cornerback and as a return man. “Obviously, I was never thinking about being a quarterback. When coach threw me in there my junior year, I was willing to take the spot and it’s worked out for us.”

Jackson had an advantage over most in passing his crash course on how to play the most important position on the field. His father, Je’Ney Jackson, a defensive back at Wyoming, spent 18 years at four different Division I universities, working as either a strength and conditioning coach or a cornerbacks coach before leaving KU this past winter for a career in the pharmaceutical industry.

“My dad has had the biggest influence on me and my game,” said Dante, who projects as a slot receiver in college. “I don’t even know where to start. It’s crazy how much he’s helped me out, how many pointers he’s given me, before-the-game pep talks, after-the-game pep talks. And he gives me pointers watching film in his little office at home.”

All that extra studying has been a factor in turning Jackson into a dual-threat quarterback. A year ago, he was a running quarterback learning to throw. This season, he’s a quarterback.

“His improvement from the summer when he first started to where he is now is unbelievable,” Wedd said. “Being a coach’s kid helps immensely.”

Jackson has completed 61 of 107 passes for 13 touchdowns and five interceptions. He has rushed for 1,132 yards and 11 touchdowns with an average of 6.9 yards per carry.

“He makes plays like we used to make in the back yard when neighbors get together,” Wedd said. “It’s tackle or two-hand touch, and you draw something up in the dirt. He’s amazing. Very instinctive.”

Jackson has a knack for doing his best work in third-and-long situations.

“He just finds a way to get things done,” Wedd said. “You think he’s dead in the water and he gets five yards, 10 yards. He’s quick on quick. And he hates to lose. I think he hits another gear sometimes because he just takes the football team on his back and says, ‘I’ll take you to the promised land. Here we go!’ And he does it.”

He doesn’t need a lot of space to slither through openings and makes himself an elusive target for those trying to land clean hits.

Jackson fell a few yards short of leading LHS to victory in late September in a 33-28 loss to Olathe North that ended with an interception on third-and-goal. The rematch takes place at 7 p.m. Friday at ODAC.

“Throughout this whole tournament, we’re just looking to survive and advance,” Jackson said.

Surrounded by much bigger bodies, Jackson has done a terrific job of surviving hits and advancing the football past the first-down marker.