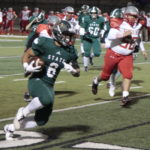 Free State senior running back Zach Wilson breaks free for a 39-yard touchdown run in the second quarter of the the Firebirds' 69-6 first-round playoff win over Wichita North on Friday at FSHS.

If there was any doubt that the Free State High football team wouldn’t be focused heading into its first-round playoff game against Wichita North, it was quickly erased on the opening kickoff.

The winless Wichita North team tried to catch the No. 1 seed in the West off-guard with an onside kick to begin the game, but Free State’s special teamers weren’t fazed and recovered it at the FSHS 49-yard line.

After that, the rout was on. Junior running back Jax Dineen rumbled to the end zone on the first play of scrimmage to jump-start Free State in its 69-6 win over Wichita North.

“We knew what we had to do. We had to play hard,” Dineen said. “We knew that team might not be the best, but they gave us good competition and gave us a good look and good practice. We came out and played hard and played good, and we did what we needed to do.”

Along with not looking past Wichita North, Dineen and the Firebirds (9-0) came in motivated to take care of the football after fumbles plagued them against Olathe East and Lawrence High. The Firebirds played turnover-free football, which was FSHS coach Bob Lisher had preached for them to do leading up to the game.

Dineen led the Firebirds on the ground with four carries for 153 yards and three touchdowns. The Free State junior scored on runs of 70, 51 and 15 yards.

Senior Zach Wilson formed a one-two backfield punch with Dineen, as he racked up 100 yards and three touchdowns on just six totes. As a team, the Firebirds ran wild for 383 yards and eight touchdowns. One of the highlights of the first-round win for Dineen was watching freshman running back Tyler Bowden and sophomore quarterback Malik Berry find the end zone in the fourth quarter.

“It’s always good to see your future. I saw a lot of potential,” Dineen said. “I saw some good runs, some good blocks and good tackles. I’m excited to see what we have the next couple of years.”

While Lisher was pleased with his team’s efficiency in the run game, he would have liked to see a little bit more production through the air early on. Keenan Garber was unable to haul in a potential touchdown catch from Gage Foster on the Firebirds’ second drive, but he made up for it a few players later. Garber accounted for Free State’s lone receiving touchdown after corralling a 35-yard strike from Foster.

“We wanted to throw the ball a little bit more tonight, but the score got out of hand so quickly that we couldn’t throw it too much,” Lisher said. “We can still work on our passing game a little bit and still work on a few things here and there, but overall, our guys were fundamentally sound and did things right. We’ve just got to continue to do that.”

Garber nearly scored on special teams as well, but his 60-yard punt return for a touchdown was called back due to a running-into-the-punter penalty. The Firebirds did record a special teams touchdown, though, when Nathan Spain blocked a punt that was recovered by Lovette Epelle in the end zone.

Garber contributed on defense, too, with one of the Firebirds’ two interceptions. Kwinton Lassiter came up with the other pick.