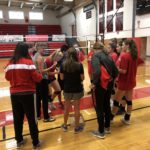 Katelyn Mask has seen some new faces this week.

After helping the Lawrence High volleyball team win a sub-state championship, the senior outside hitter returned to class on Monday where she, and undoubtedly some of her teammates, noticed a change.

“Everyone knew. … It was a really exciting experience for us,” Mask said. “Teachers I don’t even know were like, ‘Congrats on state!'”

Some of the most meaningful words, though, came from a familiar place.

Before practice on Thursday, Jo Huntsinger, a Lions assistant for 16 years and head coach from 1998-2004, addressed the team. She walked over to the group with a cardboard box in her hands, using a jacket to conceal its contents while the players gathered around.

“I have a ton of confidence in you,” Huntsinger told the team.

The Lions (26-11) were the first group since 2009 to advance to the Class 6A state tournament, featuring a roster with plenty of depth and experience. They clawed past Shawnee Mission Northwest in three sets in the sub-state title game to advance to state.

The ensuing celebration carried with it an expulsion of emotion from not only that season, but the years prior.

“It’s been a goal every year, of course,” said junior Hannah Stewart. “But we set it early, right away, like walking in the first day of practice.”

Stewart, a defensive specialist, spent last winter helping end a similar drought. Playing for Lawrence’s girls basketball team, she was in fact the player tasked with dribbling out the final seconds of a sub-state championship win over Shawnee Mission South.

The buzzer sounded and the girls basketball team advanced to its first state tournament since 2008.

“The intensity changed,” Stewart recalled. “When you get there, you can’t be satisfied.”

Stewart hopes that will carry over to the volleyball team, which will first take on Washburn Rural at the Kansas Expocentre in Topeka at 4:30 p.m. today before facing off against Blue Valley West (5:30 p.m.) and Garden City (27-8 record, 7:30 p.m.).

The Lions have previously faced two of those teams. Blue Valley West (33-5) — who ended the Lions’ state hopes in 2015 — won a three-set match in Lawrence on September 30, while the Lions lost twice to Washburn Rural (35-5) in October, though the second match was far closer than the first.

“Oh yeah. I’d rather play the teams we’ve already played,” Mask said. “We’ve never played (Rural) with fresh legs. Just the first game, to get the chance to beat them (in our) third time playing them would be awesome.”

As for the keychains, each had their own plan with what to do.

Coach Stephanie Scarbrough, who provided an enthusiastic “yeah” when asked if she gets a keychain, said she’ll keep hers with her school keys. Mask said she’ll be keeping hers on the mirror of her car, while Stewart had a more elaborate plan thought out.

“As of right now, I’ll pop it on my backpack,” Stewart said. “After state I’ll probably put it on my keys so I see it every single day.”