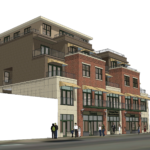 Former City Commissioner Bob Schumm has filed plans to build a five-story building on a pair of vacant lots in the 800 block of Vermont Street.

At its meeting Tuesday, the Lawrence City Commission adopted on second and final reading an incentives agreement for a mixed-use condominium project in downtown Lawrence.

The commission voted, 3-2, to approve the tax incentives, with Mayor Leslie Soden and Commissioner Matthew Herbert voting against the request. Vice Mayor Stuart Boley and commissioners Lisa Larsen and Mike Amyx said the project is good for downtown and the city’s tax base.

“I think it’s a wise investment for the city,” Amyx said.

The five-story building will include office space, retail space and 12 condos, one of which will be designated as an affordable housing unit. The building will be located on two currently vacant lots in the 800 block of Vermont Street. The cost benefit for the city will be 1.82, meaning that for every $1 in public incentives, $1.82 of benefit value will be returned. The city’s policy is that the cost benefit be at least 1.25.

Soden and Herbert also voted against the request Oct. 3, when it came in front of the commission on first reading. At that time, Herbert said he was against the project for several reasons, including the city spending more than $1 million in incentives and only creating one affordable housing unit. Soden said she was against the idea of increasing property taxes on residents while at the same time giving tax breaks to developers.

The developer, former City Commissioner Bob Schumm, will receive a 10-year, 75 percent property tax rebate through the Neighborhood Revitalization Act, as well as a sales tax exemption on construction materials. The two incentives have a combined value of $1.3 million.

When the commission approved the incentives request in October, it also directed city staff to change the wording of the provision that bans Schumm from collecting rebates related to any unit in the property he uses personally. The provision now states, in part, that the Schumms and their affiliates are ineligible for a rebate on any unit they inhabit or use personally, regardless of whether they own or lease it.

The Lawrence school board and the Douglas County Commission also recently voted to approve the incentives.

In other business, the City Commission approved a funding contract with the county to pay for renovations to Fire Station No. 1 and the Senior Resource Center for Douglas County. The contract requires the county to pay for about 26 percent of the fire station renovation and 32 percent of the senior center renovation. That leaves the city’s share of the renovations at about $4.8 million, with a total price tag of about $6.4 million due to relocation costs.