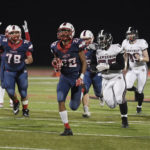 Olathe North running back Daymonn Sanchez runs for a touchdown against Lawrence High on Friday at Olathe District Activity Center.

OLATHE — Dirk Wedd walked back toward the sideline. The Lawrence High players began to gather around him, less a few who ran up and hugged him with tears in their eyes.

Wedd, moments removed from a 35-14 loss to Olathe North, began to speak to his players, telling them how proud he was of all they’d accomplished.

Even as the words left his mouth, they never truly set in for one senior.

“He can tell us over and over,” said Angel Garcia. “But I don’t think anyone would really understand.”

For the last 40-plus seasons, nearly half of which was spent at the helm of the LHS program, Wedd was a football coach, a title that’ll expire sometime after the team returns to Lawrence and he can, in his words, tell his players how much he loves them one more time.

But as the team broke from the huddle on the field, it was a teary-eyed Dante Jackson who best summed up what everyone was feeling.

“That’s my coach, that’s my man. I love him to death,” the senior quarterback said. “Getting another win for him tonight was so big. To come up short for coach Wedd, it’s awful.”

He can rest easy knowing his coach holds no resentment.

While the normally proficient LHS offense short circuited in the first half, it was the defense who kept the Lions alive.

Facing a 4th-and-goal at the one to start the second quarter, LHS senior Kristian Russell burst through the line of scrimmage to tackle Olathe North’s Jevon Parrish short of the goal line. Later in the quarter, Deshon Lewis and Harry King each had a touchdown-saving tackle.

“Super proud. They’re just unbelievably hard-working kids and they really care about each other,” Wedd said of the defense. “They grew up over the course of the season.”

The bend-don’t-break mentality only lasted so long.

Quarterback Zac Krause put the Eagles on the board with a one-yard touchdown run in the second quarter. Daymonn Sanchez and Parrish each tallied another in the final three minutes of the half, as the Lions trailed 21-0 at the break.

There was plenty of football to go.

Garcia, who rushed 21 times for 84 yards, scored on a four-yard touchdown run on a fourth down in the third quarter to put the Lions on the board. The defense forced a stop and it was Jackson’s turn to take things into his own hands.

“I just saw a hole and I went,” Jackson said. “I ran the hardest I’ve ever run in my life.”

Eighty-nine yards and into the end zone no less.

But after cutting the deficit to seven, 21-14, on the senior’s touchdown run, the Lions ran out of gas.

Already without running back Hunter Krom, the Lions watched as recent Kansas State commit Ekow Boye-Doe injured his left leg going up for a pass and was forced to leave the game.

“That’s my brother,” said Jackson, who stood over Boye-Doe as he was checked on by the staff. “When he goes down, it breaks my heart.”

In the end, the Lions didn’t have enough.

Sanchez, who totaled 313 rushing yards in a near 500-yard rushing day for the Eagles, ripped off a pair of 50-plus yard touchdown runs to seal the game and end the Lions’ season at 5-5 in the second round of the playoffs.

For that, Wedd said he was proud of how the team played over its expectations, though he maintained it was the right time to walk away.

While his Fridays next year will likely be filled with his two kids, six grandchildren and wife, the team he coached in 2017 will also hold a special place in his heart.

“We’re small and they wore us out,” Wedd said. “But I couldn’t be more proud of them.”

He started to choke up.

“You’re blessed when you work with the best kids in the state of Kansas at the greatest high school,” he said, “And your wife and family allow you to live your dream.”