Tom Eblen, mentor to a generation of KU journalists, remembered as ‘old-school teacher’ 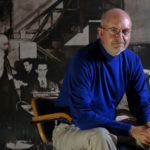 Former University of Kansas journalism professor Tom Eblen, shown here in 2007 when the Kansas Press Association honored him with the Clyde M. Reed Jr. Master Editor Award, died Saturday at the age of 80. Eblen was general manager and adviser of the University Daily Kansan from 1986 until his retirement in 2001.

Tom Eblen, who mentored a generation of journalists as general manager and news adviser for the University Daily Kansan, died Saturday at age 80 in Prairie Village.

As general manager and adviser of the Daily Kansan, Eblen oversaw the newspaper’s business affairs and provided lasting advice to students on writing and editing.

Ann Brill, dean of the KU School of Journalism, said Eblen was an “old-school” teacher who candidly shared with his students his assessment of their work. The criticism, which could be harsh, was respected because students knew it was coming from the heart, she said.

“We use the word ‘legacy’ a lot and wonder what it means,” she said. “I’ve followed the comments on Tom’s death on social media, and it’s clear this man left an incredible legacy with the school and the people and students he worked with. He was an incredible mentor, and it did not end when they were no longer with the Kansan or in school. He kept up with people for years. He was a mentor who cared about not only their academic and professional world, but really their lives.”

Eblen was a native of St. Joseph, Mo., and graduated from the University of Missouri. According to a 2007 story in the Journal-World, he worked at newspapers in Columbia, Mo., and Amarillo, Texas, before joining the Kansas City Star in 1960 as a reporter. He rose to be the newspaper’s managing editor before leaving in 1980 to become editor and general manager of the Fort Scott Tribune. He left that job in 1986 for the KU position, which he kept until his retirement in 2001.

Mike Miller, senior director of editorial for NBC Sports Digital and a 2000 KU graduate, said he was introduced to Eblen through reporting and editing classes.

“In editing, it was pretty apparent I didn’t have the attention to detail he did,” Miller said. “He drilled into us every day to make it tighter and make it better through multiple re-readings. He would always say that: ‘Make it tighter and better.'”

Miller developed a closer relationship with Eblen as a sports reporter and then as sports editor on the Kansan. But he said KU students didn’t need to be in Eblen’s classes or have a senior position on the school paper to benefit from his knowledge. All anyone had to do was look at the copies of the Kansan that Eblen critiqued every day with a red marker and posted in the newsroom.

“Every story got marked,” Miller said. “You always got some feedback from Tom. He wasn’t a warm-and-fuzzy guy. He was a guy who dispensed valuable feedback and gave you incredible information.”

Eblen continued to be a mentor after Miller graduated and even advised him to take the leap into online journalism, Miller said. He suspects the other 14 students who took Eblen’s advanced reporting class with him have similar stories of mentorship, even if they eventually moved on to other fields like marketing, he said.

Laura Roddy, the spring 2000 editor of the Daily Kansan and one of Eblen’s former students, is now the development and marketing director of Mark Arts, formerly known as the Wichita Center for the Arts. She did spend three years after graduation from KU as a copy editor at the Dallas Morning News and taught an introductory news writing course at Wichita State University, she said.

Although not in journalism now, Roddy said she “channels” Eblen’s influence daily in her current position. He was instrumental in getting her established in journalism, she said.

“I interned two summers at The Washington Post as a copy editor and know Tom had a hand in that,” she said.

Roddy, too, remembers the influence that Eblen’s daily red-marker reviews had on his students, who’d gather around religiously to look. Sometimes a scathing critique hung on the newsroom wall, but sometimes the red ink spelled out Eblen’s highest praise: “Good paper.”

“We had complete autonomy in everything we produced, but at the same time lived or died by Tom’s red-pen critique the following morning,” she said. “He never interfered, but he was always there to lend an ear and offer encouragement. He never raised his voice, and he never sugarcoated anything. But he also was our fiercest advocate and opened doors for countless internships and jobs. We were always prepared because of the training we received at The University Daily Kansan.”

Eblen became a part-time consultant for the Kansas Press Association after retiring from KU, using his red marker as he traveled the state advising local newspapers. In 2007, the KPA honored Eblen with the Clyde M. Reed Jr. Master Editor Award. In 2010, he was named to the Kansas Newspaper Hall of Fame.

Eblen was elected KPA president in 1988 and was twice elected to the national board of The Associated Press of Managing Editors. He was editor of APME News in 1978 and 1979.