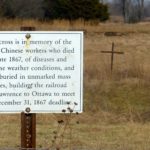 This sign north of Baldwin City tells the sad story of Chinese laborers who supposedly died 150 years ago while helping build the Leavenworth, Lawrence and Galveston Railroad. Researchers have found no primary sources to support the account that is part of Baldwin City folklore.

Twelve years ago, Mel Verhaeghe placed a sign near a fence line along North 400 Road just north of Baldwin City at the urging of his daughter.

The sign states it is in memory of the “many Chinese workers” who died of diseases and extreme winter conditions in late 1867 while working to construct a railroad line from Lawrence south to Ottawa. Verhaeghe said his former neighbors, the late Naomi and Arley Lederer, told him the Chinese laborers were buried in the long parallel mounds just north of the sign. He put up the sign after sharing the story with his daughter, Libby.

“She was in high school,” he said. “She said, ‘Those people died there. They should be remembered.'”

The sad fate of the Chinese workers has become part of Baldwin City lore. Roger Boyd, president of the Douglas County chapter of the Santa Fe Historical Society, said a previous owner of the property, the late former State Sen. Richard Allen, told him and his father, Ivan Boyd, the same story of Chinese workers buried in the pasture. The pasture used to abut the Leavenworth, Lawrence & Fort Gibson Railroad (later the Leavenworth, Lawrence & Galveston Railroad, and abbreviated as L L & G) as the tracks looped west around the steep Baldwin Hill on its way to Baldwin City. The tracks were removed after the Santa Fe Railroad closed what was the old L L & G line in the mid-1970s.

Boyd no longer believes the story and shares the opinion of a number of researchers who have concluded the grim tale is a local myth. The re-examination of the story started with Craig Voorhees, whose interest in the story was sparked when he saw Verhaeghe’s sign while searching for “swales,” or visible ruts heavy wagons left on the nearby Santa Fe Trail.

As he researched the sign’s story, Voorhees would enlist the help of Deborah Barker, executive director of the Old Depot Museum in Ottawa, and the team of Dennis Domer, a former associate dean of the KU school of architecture and later an associate professor of American studies, and Lawrence researcher David Evans. Among other places, Domer and Evans looked for sources at the Watkins Museum of History, where they worked with Monica Davis, Watkins resource assistant.

All the researchers failed to find a single contemporary reference to Chinese workers on the L L & G 150 years ago, much less evidence of their mass deaths.

In an exhibit earlier this year at the Old Depot Museum, the Chinese laborer story was cited as an example of a mythical story that became an accepted part of local history, Barker said. There is simply no mention in newspapers or other written sources from 1867 of Chinese workmen helping to build the line between Lawrence and Ottawa, she said.

“I would be delighted to believe it,” Barker said. “It’s a great story, but there’s just nothing to support it. There’s no primary source I’ve ever seen to back up that story, and I did some pretty deep digging for the exhibit.”

That’s also true of the bushel-basket full of press clippings Domer has collected on the building of the L L & G in 1867.

“It’s fake news,” he said. “We had fake news for years before the 2016 presidential election.”

There were so many press accounts because Lawrence and regional newspapers of the day extensively covered the L L & G’s construction, Barker and Domer said. The fictional Chinese laborer story detracts from the compelling story reporters documented of the race to complete the L L & G in 1867, they said.

Late in 1867, the railroad’s construction became a race to complete tracks to Ottawa so a locomotive pulling two cars could arrive in that town by Dec. 31. If the L L & G failed to meet that deadline, it would not qualify for $100,000 in bonds Douglas County voters approved for the railroad, Voorhees said. The locomotive did make it on the last day of the year, overcoming the delayed arrival of iron rails for the tracks and the need to build a temporary low-water bridge over the Kansas River in Lawrence to transport construction materials.

The reporters making regular excursions to work sites certainly would have mentioned Chinese workers and any outbreak of infectious diseases that would have been a threat to the wider population, Voorhees said. There was a good reason no record of Chinese laborers can be found in the stories reporters filed about the 1867 work on the L L & G, Voorhees said. Most Chinese laborers in the U.S. at that time were busy constructing the Central Pacific Railroad in the mountains west of Sacramento, Calif., he said.

“The timeline is off,” he said. “In 1867, they were blasting tunnels through the Sierra Nevada Mountains for the transcontinental railroad.They would not have sent a lot of Chinese laborers to a relatively minor project like this.”

Domer and Voorhees believe J.P. Mickey, of Ottawa, invented the Chinese laborer story. A freelance photographer and writer, J.P. Mickey wrote a 1963 article for the Kansas City Star on the race to complete the L L & G to Ottawa in late 1867. Without providing any source, the story claimed “an unknown number of Chinese” and white workers were buried along the L L & G right of way after dying from frigid winter conditions and “malaria, typhoid, smallpox and accidents,” Voorhees said.

Thirteen years after the story ran in the Star, an article on the L L & G’s construction appeared in Baldwin City Ledger with the tragic account of Chinese laborers, Voorhees said. That story was written by Loren Litteer, who repeated it in a number of pamphlets he authored on Baldwin City history, he said.

Voorhees has an alternate theory about the mounds, too, which explains their presence near the former railroad. It was a theory he developed after visiting the site with Rex Buchanan, director emeritus of the Kansas Geological Survey. The mounds are “disturbed ground,” which is a catch-all phrase for human activity, Buchanan said.

“They are not consistent with what you would expect from a burial site,” he said.

The mounds are the ridges that remained after a horse-powered excavator was used to remove topsoil for use on the L L & G, Voorhees said.

Verhaeghe — the man with the sign — has talked to Voorhees, but remains more impressed with the story the Lederers recounted. He believes Naomi Lederer was passing on a story she first heard from her parents and grandparents, who lived on property adjacent to the mounds.

With the L L & G desperate for workers, it could have recruited some Chinese laborers in late 1867 when work stopped in the Sierra Nevada Mountains for the winter, Verhaeghe said.

He could resolve the question with a shovel, but that’s not something he wants to do, Verhaeghe said.

“I like the story,” he said. “I don’t want to be disappointed. Everybody loves a mystery.”