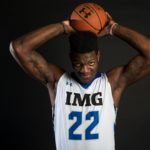 Class Of 2018 big man Silvio De Sousa of IMG Academy continues to pursue the possibility of enrolling at Kansas early in time to join the Jayhawks this season. De Sousa, the No. 25 overall player in his class according to Rivals.com, committed to Kansas in August, signed with the Jayhawks in November and was officially cleared to join the Jayhawks on Dec. 22. He will report to campus on Dec. 26 and will be eligible to compete in games after being certified by the NCAA, a process that could be done in time for the Big 12 opener, Dec. 29 at Texas.

And a decision on the status of withheld freshman Billy Preston appears to be not far behind.

De Sousa, the Angola native and IMG Academy power forward who signed with Kansas in November took his last final on Tuesday and Kansas coach Bill Self said Tuesday night, at the team’s annual holiday shopping event at Wal-Mart, that he expected to “know by the end of the week for sure,” whether De Sousa was academically cleared to join the Jayhawks for the second semester.

“I do feel really optimistic about that one, unless something went really haywire,” Self added.

According to the IMG calendar, Thursday is final exam make-up day and winter break, which marks the official end of the fall semester, begins Friday.

De Sousa, a 6-foot-9, 245-pound forward from Angola who committed to KU in August and signed with the program during the early signing period in November, has eyed this possibility since first committing to Kansas.

He told the Journal-World then, while announcing his commitment to KU, that his goal was to play the first semester with IMG, graduate early and report to Kansas in time for the second semester.

Both he and his guardian, Fenny Falmagne, also said at the time that De Sousa’s desire to get to KU early had everything to do with getting a head start on his college career and that he still planned on playing at Kansas during the 2018-19 season, which would have been his freshman year.

“What he truly wants to do is to be there as soon as possible,” Falmagne told the Journal-World at the time. “His graduation date is in December right now and he wants to get there (to Kansas) in December.”

Ranked by Rivals.com as the No. 25 overall player in the 2018 class, De Sousa’s size, frame and physical presence would be a huge addition to a Kansas roster that has played the first 11 games of the season with 7-foot center Udoka Azubuike and 6-8, 215 pound Mitch Lightfoot as the only big men.

Preston has missed all 11 games this season, the last 10 as the result of a compliance issue involving Preston’s vehicle.

Self on Tuesday night also said Preston’s situation may be nearing a resolution, saying, “I don’t anticipate him playing (on Thursday when KU plays Stanford in Sacramento), but I do anticipate it getting very close to knowing if and when he will be able to play. I’m pretty optimistic on it, our people are pretty optimistic. But it’s at the point now where it’ll be out of our hands and somebody else has got to make a decision.”

If KU is able to add both Preston and De Sousa, or either one of them, in time for the start of Big 12 play — KU opens its conference slate on Dec. 29 at Texas — Self said the team and the players likely would need some type of adjustment period, with Preston needing “seven to 10 days,” to get back up to speed and De Sousa needing “a couple weeks.”

“If we’re able to have our full complement of players and you figure out everybody’s role, depending on if and when we get our guys back, you’re probably looking at the first of February before we know how to play and plug everybody in,” Self said. “But it’ll still be a big bonus for us.”

ESPN.com broadcaster and international talent evaluator Fran Fraschilla said when De Sousa committed that he’d “bet my money on this kid,” and added that De Sousa was an “absolute stud” whom Self and the KU fan base would quickly come to love.

De Sousa, who turned 19 in October, has no plans of coming into the program with a star’s mentality seeking immediate fame and glory.

“Most people know how I play basketball,” he told the Journal-World. “But I want to help them with my size and just rebound the ball and do whatever it takes to help them.”