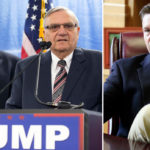 In the AP file photo at left, from January 2016, then Republican presidential candidate Donald Trump, left, is joined by then Maricopa County, Ariz., Sheriff Joe Arpaio. At right, Kansas Secretary of State Kris Kobach is shown in his office in Topeka in May 2017.

Topeka ? Kansas Secretary of State Kris Kobach, who was at the center of a controversial anti-illegal immigration law in Arizona that led to a criminal contempt conviction against Maricopa County Sheriff Joe Arpaio, is now defending President Donald J. Trump’s decision to pardon Arpaio.

“Joe Arpaio steadfastly enforced the law while the Obama administration rewarded illegal immigration and even (Immigration and Customs Enforcement) agents to break the law. A pardon is therefore appropriate,” Kobach said in a text message to the Journal-World in response to a request for comment.

In 2010, Arizona passed a law, commonly known as the “papers please” law, said that anyone police suspected of being in the country illegally must produce proof of legal presence or face arrest.

Critics said the law encouraged police to engage in racial profiling, and portions of the law were eventually overurned by the U.S. Supreme Court.

Kobach also worked on contract for the Maricopa County Sheriff’s Department, earning $300 per hour to train law enforcement officers there on procedures in arresting suspected illegal immigrants, the Journal-World reported in April of that year. That was six months before he was elected secretary of state, a time when he was working as a private attorney.

Kobach was re-elected as secretary of state in 2014 and is now a Republican candidate for governor.

In 2011, a federal judge found Arpaio’s officers were racially profiling Latino drivers, and he ordered Arpaio to stop detaining immigrants simply because they lacked proof of legal presence. However, for the next 18 months, his deputies continued the practice.

In July, Arpaio, who is now 85, was convicted of criminal contempt, a misdemeanor, for defying the judge’s order. He was scheduled to be sentenced in October and could have faced up to six months in jail.

“I am pleased to inform you that I have just granted a full Pardon to 85 year old American patriot Sheriff Joe Arpaio,” Trump posted on Twitter at 8 p.m. central time Friday. “He kept Arizona safe!”

I am pleased to inform you that I have just granted a full Pardon to 85 year old American patriot Sheriff Joe Arpaio. He kept Arizona safe!