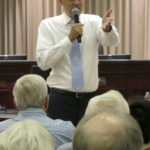 A Republican congressman in Kansas sought Tuesday night to sound bipartisan, centrist notes while defending the GOP’s approach on health care and other issues during a town hall meeting with national Democrats already targeting him in a district that President Donald Trump narrowly lost last year.

Rep. Kevin Yoder told about 100 people at the city hall in the Kansas City suburb of Olathe that he’s willing to break with Trump, citing what he saw as the president’s inadequate response to a white nationalist gathering and violence in Charlottesville, Virginia. But he drew boos from many audience members when he also said he believes Trump genuinely wants to make the U.S. better.

His 3rd Congressional District marries Democratic neighborhoods in Kansas City, Kansas, with perpetually expanding acres of subdivisions and shopping centers in GOP-leaning suburbs to the south. Four of the five representatives in the past 50 years have been Republicans, but the district was centrist enough for Democrat Dennis Moore to hold the seat for 12 years before Yoder captured it in 2010.

Yoder mixed his defense of orthodox GOP positions, such as support for gun rights or opposition to moving toward universal government health insurance coverage, with calls for greater bipartisanship in Congress. He touted his ability to work with Democrats on issues such as protecting individuals’ email privacy.

When a woman in the audience asked him whether he’d work with Democrats and women on health care, he said, “Of course, I’d be happy to work with anybody that wants to work towards a solution.”

“This isn’t about scoring political points,” he said. “This to me is about getting something done that makes the health care system better.”

The Democratic Congressional Campaign Committee targeted Yoder in the final weeks of last year’s campaign, as it and other outside groups spent more than $2.1 million on the race. Yoder previously had little trouble winning and keeping the seat, even following a brief burst of international attention over a 10-second skinny dip in the Sea of Galilee during a 2011 congressional trip.

The DCCC put Yoder’s districts on its first list of 2018 targets in January. Democrats also smell an opportunity in Yoder’s vote in May for the House GOP’s plan for overhauling health care.

Even as Yoder pointed out his differences with Trump, he said, “My first six years in office, we had plenty of people calling asking why we hadn’t impeached President Obama. Now we have people calling and asking why we haven’t impeached President Trump. I think the president’s been duly elected. He deserves the right and chance to lead this country.”

Dan Ferguson, a Prairie Village resident who does communications for an engineering firm, said Yoder showed he’s out of step with the district with remarks equating the Trump administration’s flaws with the Obama administration’s.

“I love to hear the talk of bipartisanship out of Congressman Yoder, but I have yet to see a lot of production out of that,” said Ferguson, a Democrat.

Many crowd members clapped for universal, government-run health coverage. But outside before the event, as about 80 people gathered to hold signs quietly, the majority appeared to support Yoder.

“They were more representative of the district,” said Mary Kay Culp, executive director of the anti-abortion group Kansans for Life.