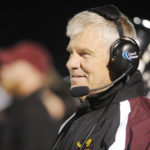 Lions’ head coach Dirk Wedd was named 2015 coach of the year in the Sunflower League.

The way some people griped about Lawrence High football coach Dirk Wedd resisting change you would have thought he still was walking around in short shorts from a few decades ago.

Runs the ball too much. No imagination. Plays everybody both ways, etc.

He even found a for-sale sign on his front lawn several years ago.

Now here’s what those same people are saying about the Lawrence-to-the-bone high school football coach: Crickets.

That’s right, not a word.

The old ball coach has done the equivalent of taking a sledge hammer to the Victrola and listening to his music on ear pods connected to his iPhone.

And get this, it’s working way better than anybody could have had any right to expect.

On paper, some were asking the same preseason question about the Lawrence High and University of Kansas football teams: Does a two-victory season sound about right?

That projection is looking a little optimistic for Kansas and way too pessimistic for LHS a few games into both of their seasons.

Instead of loading up on two-way players, Wedd has gone to platooning players, limiting almost all of them to one side of the ball.

Not only that, the Lions run a no-huddle, up-tempo offense triggered by a quarterback who had never played the position, an approach similar to the one Wedd used when he had all-state performer Brad Strauss at quarterback.

All these changes for a team that lost 18 starters from a 10-1 squad bounced from the 6A playoffs by Blue Valley, 42-17, took some guts to implement.

“It’s been quite an experience for an old coach,” Wedd, 64, said of all the changes.

Wedd is in his 29th season coaching football at his alma mater, his 18th as head coach.

“You never want to say that an old dog can’t learn new tricks because as a high school coach you have to be flexible to put your kids in the best position,” Wedd said.

With such loud talent a year ago, both in the speed and size departments, Wedd wanted his best athletes playing both ways.

With such a young roster, he decided to give platooning a try so that players would have half as many jobs and therefore could get twice as many reps. The players evidently are learning fast because the Lions defeated Shawnee Mission West, ranked No. 5 in the state in the preseason, 49-19 Friday night.

“It’s been a really good experience for us and the kids love it,” Wedd said. “Everybody wants to start, so we have 22 happy kids. Last year we had maybe 14 happy kids.”

One player has made Wedd particularly happy.

“We caught a break with a little kid who has been one heck of a quarterback,” Wedd said.

Speedy, high-flying Dante Jackson, a 5-foot-6, 135-pound junior, plays a little defensive back, too, but Wedd knows he needs to keep him fresh enough to lead the offense.

The line Jackson plays behind develops more quickly and stays fresher during games because they don’t have to stay on the field to play defense. From left to right, the blockers are: Kristian Russell, Nick Englebert, Jacob Mills, Jesse Tunget and Kevin Nichols.

Also, Kobe Buffalomeat, a 6-8, 282-pound basketball player who did not come out for football the past two seasons, “is really rounding into a good player who has helped us a lot,” Wedd said.

Wedd said he knew he had a great athlete in Jackson and a “really good football player,” in three-year starter Jake Unruh, a 6-1, 251-pound defensive lineman and knew he could bank on strong play from fellow senior Mark Greene. But for the most part, the coach had more questions than answers coming into the season.

“The kids are really doing a good job,” Wedd said. “They’re getting twice as much coaching and not having to flip halfway through practice means practices are shorter and the kids like that too.”

The Lions (3-1) will face bigger, more experienced competition and won’t win them all the rest of the way, but they already have won three and nearly twice as many players can take significant ownership in those victories.

Change can be a beautiful thing.