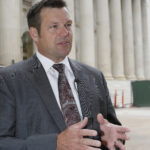 Kansas Secretary of State Kris Kobach responds to questions outside the 10th U.S. Circuit Court of Appeals after delivering an argument in the legal fight over how the state of Kansas enforces its proof-of-citizenship requirement for voters who register at motor vehicle offices on Tuesday, Aug. 23, 2016 in Denver. (AP Photo/David Zalubowski)

Wichita ? Kansas Secretary of State Kris Kobach has discarded as of August the registrations of about 6,570 prospective voters under a rule that allows him to purge them after 90 days primarily for lack of proof of citizenship, the League of Women Voters said Tuesday.

Those prospective voters whose names are missing likely registered at some place other than a motor vehicle office and so their right to vote is not protected by recent court orders compelling Kobach to keep them on the rolls. They would need to register again in order to vote in November.

“Today, it feels like a lot of people,” said Marge Ahrens, co-president of the League’s Kansas chapter. “We have many (Kansas) towns that are not that big.”

Kobach’s spokesman, Craig McCullah, said Tuesday he could not immediately confirm whether the League’s figures are accurate.

The League purchased copies of the Kansas voter suspense list in March and in August, and compared them to calculate the total number of people whose registrations are missing from either the current voter rolls or the suspense list. Their names have been posted on the League’s website so people can check to see if their application was thrown out.

That August number is down from the 18,762 of all prospective voters whose applications were thrown out between November 2015 and March 2016 because they did not provide the citizenship paperwork within the allotted 90-day period, Ahrens said. Kansas is one of four states that have passed laws requiring proof of citizenship to register to vote.

Fewer people were “purged” in the August listing primarily because U.S. District Judge Julie Robinson in May ordered Kobach to register for federal elections people who had registered at motor vehicle offices without providing documentary proof of citizenship, Ahrens said.

Most people register to vote when getting their driver’s licenses. As of Sept. 1, there were 18,611 people who registered at motor vehicle offices without proof of citizenship, according to a court filing. The state has said that as many as 50,000 people could be in that category by the November election.

Those people can vote in the federal election in November, and a Kansas judge will hear arguments Wednesday on whether their votes will also count in state and local races.